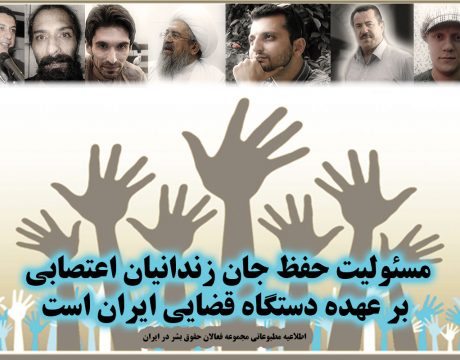 HRANA News Agency – Human Rights Activists in Iran (HRAI) has issued a statement in response to the plight of the prisoners on hunger strike in various prisons around the country. HRAI While stating the demands of those on strike legitimate, also hold the judiciary responsible for the wellbeing and lives of prisoners on the strike.  The full text of the statement follows:

A number of political prisoners in Iran are on hunger strike. The scope, number of strikes and the long duration of some of the hunger strikes have raised the concerns of public and human right defenders.

Arash Sadeghi, civil activist has been on hunger strike for sixty nine days so far , and Ali Shariati another prisoner of conscience is on his sixty first day of hunger strike today.

Saeed Shirzad, Hasan Rastegari, Nazar Zaka, Ayatollah Mohammad-Reza Nekoonam and Mehdi Kookhian are some of other prisoners currently on hunger strike in various prisons around Iran.

Mr. Sadeghi continuous his sixty ninth day of hunger strike, while based on medical reports, his kidneys have been highly damaged, his blood has thickened and is in immediate danger of abdominal adhesion. This prisoner of conscience who might face death at any time, is only demanding for fair law enforcement in regards to his spouse, Golrokh Iraee.

Mr. sadeghi demands that his wife’s case be examined in open court and based on law. He also demands that, based on her legal rights his wife should be free and should be given a chance to defend herself while her charges are under investigation, especially because of her serious illness.

Security-judicial authorities have not shown any promising reactions towards Mr. Sadeghie’s dire situation and his legal demands. This deliberate indifference of the judiciary and security system towards Mr. Sadeghi is not unprecedented. There have been many bitter events in Iranian Prisons and those responsible for these cases were never punished and there has not been any independent investigations into them, for instance cases of death of the “Vali allah Feiz Mahdavi, Abdul-Reza Rajabi, Omid-Reza MirSayafi, Zahra Kazemi, Akbar Mohammadi, Zahra Bani Yaghoub, Hoda Saber, Mohsen Dokmechi, Amir-Hossein Heshmat-Saran, Satar beheshti and etc.”

The scheme of deliberate indifference towards strikers and protesters that the judicial system has been following in conjunction with the security system, is violation of their commitment and could cause many more death of prisoners.

HRAI While stating the demands of Prisoners on strike are legitimate and expressing its concern for the wellbeing of prisoners on hunger strike, and believe it to be unfortunate that the political prisoners of Iran have no other way but to endanger their health and life just to exercise their rights.

HRAI holds relevant government institutions fully responsible for protecting the wellbeing and life of prisoners. HRAI also emphasizes on implementation of articles 102,103,113,115 and 216 of the state security and prison bylaws which is the minimum standard for treating the convicts.

HRAI believes Islamic Republic of Iran over the years of its ruling, in regards to prisoners’ rights has alarmingly and frequently violated many human right conventions, In particular the convention of the right of prisoners adopted by the United Nations.

HRAI as a human right organization calls on the judicial officials to act independently from the Security Council and calls for the immediate transfer of the prisoners on hunger strike, especially Arash Sadeghi, to equipped medical centers and the start negotiations with the prisoners on strike.

Human Right activists in IRAN (HRAI), calls on Ms. Asma Jahangir, Special Rapporteur of the United Nations’ Human Rights Council, to give priority to the issue of violation of the rights of prisoners, and to inquire on the murders, injuries and dire conditions of Iranian prisons along with other human right violations in Iran. HRAI also calls on all other awaken consciences and human right defenders to seek for protecting the wellbeing and the life of Prisoners on hunger strike.