HRANA News Agency – Afshin Sohrabzadeh who had been sent to the hospital urgently was returned to the prison without treatment on the same day. During the recent weeks he has been constantly transferred to the hospital but the authorities have prohibited him from being hospitalized despite doctors’ recommendations.
According to the report of Human Rights Activists News Agency in Iran (HRANA), Afshin Sohrabzadeh, exiled political prisoner in Minab prison who suffers from cancer was sent to the hospital urgently on May 31st. END_OF_DOCUMENT_TOKEN_TO_BE_REPLACED

HRANA News Agency – The respiratory problems of Afshin Sohrabzadeh, political prisoner suffering from cancer in Minab prison, progressed and his health condition deteriorated and he coughed blood on April 20, he reached the brink of suffocation. In this jail, it is 5 months that the doctor is not present in the clinic.

According to the report of Human Rights Activists News Agency (HRANA), Afshin Sohrabzadeh, exiled political prisoner in Minab prison who suffers from cancer and severe internal bleeding and breathing problems, was once more in a critical health condition. END_OF_DOCUMENT_TOKEN_TO_BE_REPLACED 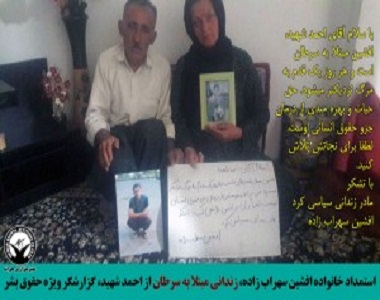 HRANA News Agency – Afshin Sohrabzadeh, exiled political prisoner in Minab prison, who suffers from cancer, is deprived of proper medical care, and is not able provide treatment costs and as well as the specified bail for a medical leave. The prisoner also is deprived of having insurance because of his ID documents being confiscated. Recently 14 human rights organizations issued a joint statement to warn about his physical condition and called for his immediate benefit of health care and fair hearing.
According to the report of Human Rights Activists News Agency in Iran (HRANA), his mother in despair and worry, in a handwritten in her hands addressed to the UN Human Rights Special Rapporteur, asked him to try to save her son due to his serious health condition and that the death threatens him. END_OF_DOCUMENT_TOKEN_TO_BE_REPLACED

HRANA News Agency – The physical condition of Afshin Sohrabzadeh, political prisoner in exile at Minab prison, who is suffering from colon cancer, has gotten worse and despite vomiting blood in the prison infirmary, prison authorities are preventing him from being transferred to a hospital outside the prison.
Minab prosecutor has told this ill prisoner some days ago: “It does not matter if you cannot provide a bail for medical leave, you will die in prison and we will send your body to the morgue. END_OF_DOCUMENT_TOKEN_TO_BE_REPLACED 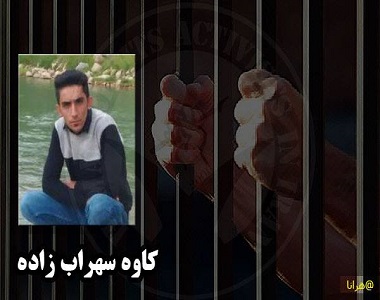 HRANA News Agency – Kaveh Sohrabzadeh, brother of Afshin Sohrabzadeh, political prisoner suffering from cancer, who was arrested because of following his brother’s treatment process, was released after signing a commitment.
According to the report of Human Rights Activists News Agency in Iran (HRANA), the Revolutionary Guards agents in Kermanshah arrested Kaveh Sohrabzadeh when he was about to leave his home, without any warrant and transferred him to the Revolutionary Guards Intelligence Office in Kermanshah (Shahid Siahkamari). END_OF_DOCUMENT_TOKEN_TO_BE_REPLACED