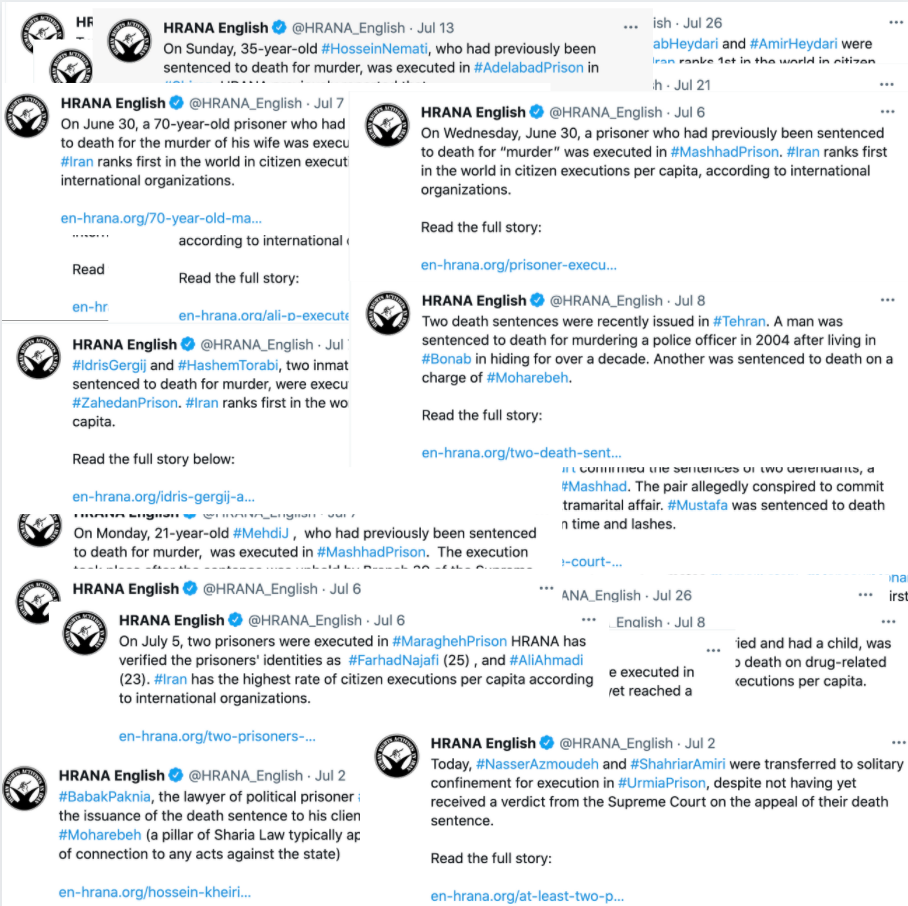 According to HRANA, the news agency of Human Rights Activists, in July, Iran executed a staggering 38 individuals for crimes related to drugs, murder, and sexual offenses. In the previous three months, an additional 44 individuals faced the same fate. All of these executions took place under the direction of president-elect Ebrahim Raisi, who will assume office on Friday.

Raisi, who has been colloquially referred to as the “Ayatollah of Massacre” for his role in the extra-judicial executions of political prisoners in 1988, continues to evade accountability for his endless violations of human rights.

According to Senior Advocacy Coordinator, Skylar Thompson, “The impending Ebrahim Raisi presidency is a frightening illustration of the culture of impunity in the Islamic Republic of Iran; it shows that without international support for a meaningful pathway to accountability, Iranian citizens will continue to suffer at the hands of the regime.” She continued, “As Head of the Judiciary, Raisi presided over the highest number of executions per capita, and in addition has committed some of the most egregious crimes imaginable throughout his career, his impending position as President promises comparable ruthlessness”

In addition to the staggering number of executions, capital punishment sentencing is also on the rise [See figure 1]. In July alone, a total of 10 people were sentenced to death, compared with 6 in June, 3 in May, and 5 in April. 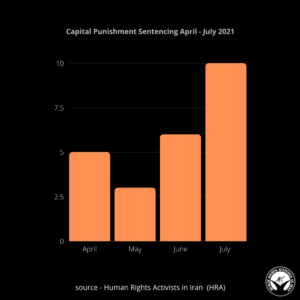 While the death penalty is not prohibited under international law,  in countries that have not abolished the death penalty, the sentence may only be legally imposed for ‘the most serious crimes’. According to HRC General Comment no. 36 on The Right to Life (GC 36), the phrase “the most serious crime” must be “read restrictively and apply only to crimes of extreme gravity”.

Iran’s judicial system interprets the phrase, to put it lightly, in a way that is less-than-restrictive.  Despite recent legal reforms, drug-related offenses accounted for the highest number of executions between April and July (48.8%).  GC 36 also establishes that “sexual offenses, while serious in nature, must never serve as a basis for the imposition of the death penalty”, but from April to July 2021, 4 individuals were executed in Iran on charges of a sexual offense. 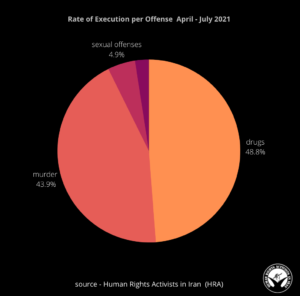 One of the 10 executed in July was juvenile offender Baha al-din Ghasemzadeh. Juvenile executions are explicitly prohibited under international law, but they are an enduring practice within Iran’s criminal justice system. In fact, in a recent interview with Agence France-Presse, Secretary of the state-run High Council for Human Rights Majid Tafresh said that the Islamic Republic executes juvenile offenders “three to four times a year”, and claimed this should not be considered a human rights violation.

According to HRA’s Spreading Justice Project Manager, Parasto Azizi, “HRAs Spreading Justice team has documented several individuals including judges and prosecutors responsible for imposing the death penalty for crimes falling outside of those internationally recognized as most serious including illegally imposing the death penalty in cases involving juveniles.”

*In addition to the numbers analyzed in this report, on August 2nd, the day of publishing, two juvenile offenders were executed in Urmia Prison on drug-related charges.