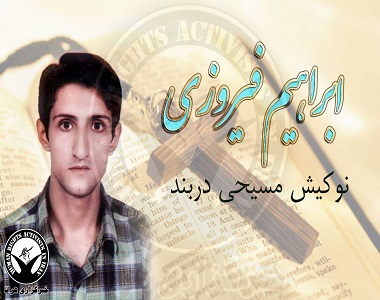 HRANA News Agency – The mother of Ebrahim Firuzi who is serving his imprisonment in Rajai Shahr Prison in Karaj, published a video and asked authorities to help to with Ebrahim Firuzi’s freedom.
According to the report of Human Rights Activists News Agency in Iran (HRANA), she referred to her blindness and physical problems, as well as Ebrahim’s situation and demanded his freedom.
For more information, check HRANA’s latest report about Ebrahim Firuzi.

According to the report of Human Rights Activists News Agency in Iran (HRANA), Ebrahim Firuzi who had begun a hunger strike from last Thursday, ended his hunger strike on Monday 24th August, on the fifth day and after the head of Rajai Shahr prison, Mardani, promised to do something for him, and treated and gave warning to the other prisoners in ward 10 of Rajai Shahr prison. END_OF_DOCUMENT_TOKEN_TO_BE_REPLACED

According to the report of Human Rights Activists News Agency in Iran (HRANA), the hunger strike by Ibrahim Firuzi, a Christian convert entered its fourth day, while, despite the Rajai Shahr prison’s authorities’ promises, he insists on his demand, and has declared that he will continue until he achieves the results and the implementation of the demands. END_OF_DOCUMENT_TOKEN_TO_BE_REPLACED