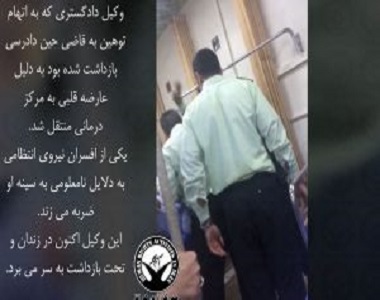 HRANA News Agency – Hossain Mehrandish, a lawyer who had been arrested by the order of the judge in branch number 29 during defending his client in Shahid Madani court was released by the help of a group of lawyers and putting the bail. After being arrested and beaten in the head, he was transferred to a medical centre because of a heart failure where he was again beaten by an officer of police station number 148 of Enghelab.
A close source to Mr. Mehrandish’s family told HRANA’s reporter about the details of that incident, “Mr. Mehrandish was few minutes late in a session that he had in branch number 29 of Tehran, and realized that the secretary was reporting the absence of the lawyer. Mr. Mehrandish told him: ‘I am here, I was just a little bit late.’ Despite that, that secretary told him that he was late. The judge sided with the secretary, but he responded that ‘I am a lawyer and I have no reason to lie. If you want to side with your secretary that is your choice.’ Then the judge ordered him out of room and the security of court arrested him”. END_OF_DOCUMENT_TOKEN_TO_BE_REPLACED

HRANA News Agency – Hossain Mehrandish, judiciary lawyer, was arrested following the order of the judge in branch number 29, while he was defending his client. He who had heart failure following the tension was transferred to the hospital while being in police custody. At least one of the police officers hit the chest of this lawyer for no obvious reason. This could have had deadly consequence for someone in this situation. Hossain Mehrandish is currently in Rajai Shahr prison.

According to the report of Human Rights Activists News Agency (HRANA), Hossain Mehrandish who was defending his client in Shahid Madany court, was arrested by the order of the judge in branch 29 with the allegation of insulting the judge. END_OF_DOCUMENT_TOKEN_TO_BE_REPLACED