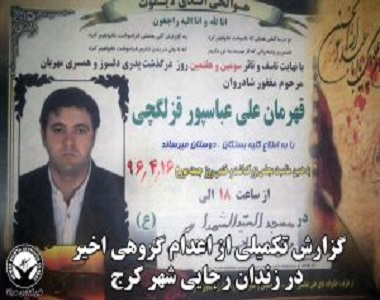 HRANA News Agency – Seven of eleven prisoners who had been transferred to solitary confinement in Rajai Shahr prison in Karaj were executed and four returned to their wards with consent from the parents of victims. Among the executed, there was a prisoner whose sentence was the result of a tribal conflict, and his death sentence was issued on the basis of the “knowledge of the judge”, and not on the documents and evidences. His execution resulted in a conflict in front of the prison and police used warning shots.

According to the report of Human Rights Activists News Agency in Iran (HRANA), seven prisoners were executed in Rajai Shahr prison in Karaj on July 5. The identity of these seven prisoners have been announced by HRANA as: Nasser Abangah, Abbas Yousefi, Hossein Rahzani, Mehdi Ebrahimi, Omid Sohrabi, Omid Rostami and Ghahraman Ali Abbaspour. END_OF_DOCUMENT_TOKEN_TO_BE_REPLACED 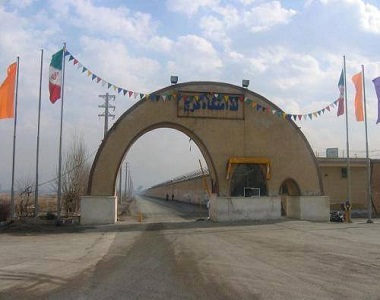 HRANA News Agency – 6 political activists have been arrested on April 9, 2014 at their homes in Shahriar in Karaj.
According to the report of Human Rights Activists News Agency (HRANA), Hassan Ebrahimi, Mehdi Ebrahimi, Mohammadreza Zabihi, Manuchehr Yousefi, Somayye Khalili and Mahin Sayyar Sharabi have been arrested on charge of supporting “Rights and Justice Organization” which is a political organization having different interpretations of Islam. END_OF_DOCUMENT_TOKEN_TO_BE_REPLACED