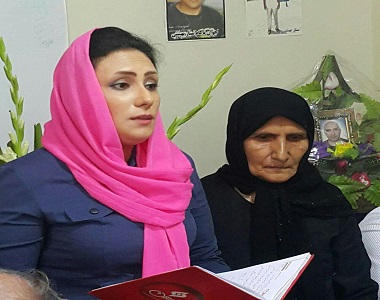 HRANA News Agency – Following the arrest of Sahar Beheshti and her husband, on the occasion of his dead brother’s birthday (Sattar Beheshti) on August 26, Gohar Eshghi, Sattar’s mother and a group of civil rights activists went to the police station in Robat Karim where Mohammad Mozaffari one of the activists was arrested and interrogated and abandoned after half an hour in the wilderness surrounding area. Sahar Beheshti was questioned by the judge on duty in Parand court.
According to the report of Human Rights Activists News Agency (HRANA), on August 26, following the announcement of the birth ceremony of Sattar Beheshti, security forces surrounded his father’s house and prevented the attendants of entering the house. Also, Sahar Beheshti, sister of Sattar Beheshti and her husband, Mostafa Eslami have been arrested “while being beaten” and transferred to the police station in Robat Karim. END_OF_DOCUMENT_TOKEN_TO_BE_REPLACED