According to HRANA, the news agency of Human Rights Activists, there are about 15 inmates imprisoned on LGBTQ+ related charges in Wards 2 and 10 of Rajai Shahr Prison in Karaj.

In contrast, the 15 LGBTQ+ prisoners being held in these notorious wards have largely been detained on charges related to having consensual same-sex relationships, known as “Lavat”, which are forbidden under Islamic Law.

“From the very moment they come to prison, (these prisoners) are harassed and intimated by inmates convicted of violent crimes,” an informed source told HRANA. “Some of them are still waiting for legal proceedings after two to five years.”

In Iran, rather than serving to protect sexual minorities, the law is weaponized against them. Under Chapter 1, Section 2 of the Islamic Penal Code, adult men have been sentenced to flogging and even death, just for engaging in sexual intercourse with other adult men.

“Some of them have been long time held in prison without holding any court and conviction,” the informed source added. “They are living in hard conditions worsened by the treatment of fellow inmates.”

Honoring International Day Against Homophobia and Transphobia, HRANA published an extensive report on the violation of the rights of sexual minorities in Iran during the last year, which includes a list of individuals and institutions who have violated the rights of the LGBTQ+ community. This list has been collected by Spreading Justice, a database of human rights violators in Iran.

The following is an overview of human rights violations in Iran on February 7th, 2019 based on the information compiled and verified by Human Rights Activists News Agency (HRANA).

(1) More than four protests were organized across the country on February 7, 2019. Teachers and educators in Isfahan, the investors of Padideh Shandiz in Mashhad, the teachers of Esfarayen in the Ghazvin province, the workers of Karaj municipality, have held protests to request their demands.

(2) Two workers were injured in Gotvand city in Khuzestan province because of negligence in the oversight of safety conditions in their workplaces. Iran ranked 102 in the workplace safety among other countries.

(3) The CEO of Imam Khomeini Relief Foundation confirmed that 50 million Iranians reported to live below the poverty line.

(4) Human Rights Watch announced that Iran’s authorities are violating fair trial standards in the case of eight environmentalists; “Iranian authorities should open a transparent investigation into the torture allegations the accused have raised during the trial.”

(5) Ehsan Karami was banned from appearing on Iran national television. He is a singer, actor, and television host.

(7) A number of Ahwazi Arab citizens were arrested by intelligence agents in Hamidiyeh in Ahvaz. Nabi Saedi, Ahmad Saedi, and Shahab Sayahi were arrested on Wednesday, February 6th. No further information was available on their location or the reason for their arrests.

(8) AbuBakr Rostami, a political prisoner on death row in Zahedan prison, began hunger strike after being transferred to the quarantine ward for an unknown reason. He was a medical student at Zabol University of Medical Sciences and spent the past three years in prison on the charges of “acting against national security by collaborating with anti-regime groups” and “Moharebeh” (enmity against God).

(9) A converted Christian, Sina Moloudian, was released on bail on Monday, February 4th. Iranian security officials raided his home and confiscating his belongings in Isfahan on January 23, 2019.

(10) Maryam Mombeini, the wife of Kavous Seyed-Emami, is still barred from leaving the country. Seyed-Emami was the Iranian-Canadian environmentalist who died in prison after being accused of spying.

(11) The Iranian government arrested, imprisoned or executed at least 860 journalists over 30 years frpm 1979 to 2009, according to documents leaked to Reporters Without Boarders (RSF) and at least four journalists were executed.

(12) More than 500 workers have been laid off in Ghazvin province while two workers of Pars Tire Company in Saveh were laid off after the wage protest.

(13) The Supreme Leader, Ali Khamenei, pardoned or reduce the sentences of a large number of convicts on the 40th anniversary of Iran’s Islamic Revolution which is commemorated in Iran.

HRANA News Agency – A prisoner with life imprisonment sentence, hanged himself in Rajaei Shahr prison and died.
According to the report of Human Rights Activists News Agency (HRANA), a prisoner who had been sentenced to life in prison for rubbery, committed suicide and hanged himself with a rope, and died on Tuesday, December 20. END_OF_DOCUMENT_TOKEN_TO_BE_REPLACED 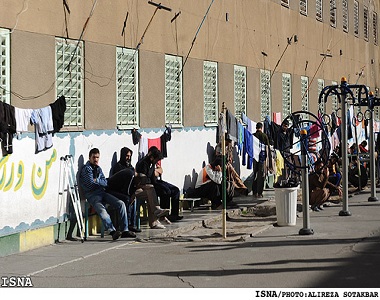 HRANA News Agency – The security forces of Rajaei Shahr prison, seized some of the things that were bought from the prison store, during the inspection of hall 10 of ward 4.

According to the report of Human Rights Activists News Agency (HRANA), the hall number 10 of ward 4 of Rajaei Shahr prison, which is Sunni prisoners’ section, was inspected on Wednesday August 5, and officials sent prisoners to yard for two hours. END_OF_DOCUMENT_TOKEN_TO_BE_REPLACED