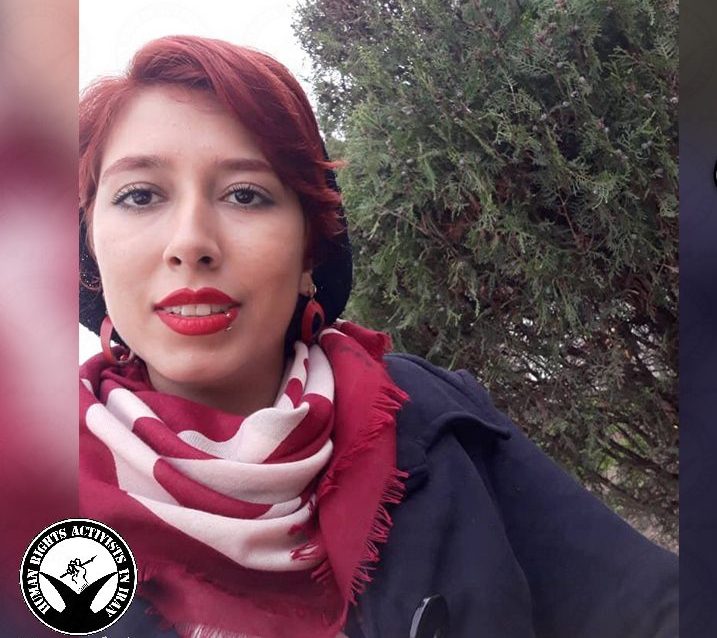 Saba Kord Afshari, a civil activist who is currently imprisoned in Evin Prison, has been sentenced to 15 years in prison for “promoting corruption”, a charge of which she was previously acquitted. Her lawyer has expressed his concerns regarding her acquittal which was communicated to her in prison, emphasizing the unlawful proceedings of her case. Should this error in judgment fail to be remedied Ms. Kord Afshari, who is currently serving a nine-year sentence can face up to 24 years of imprisonment in total.

According to HRANA Saba Kord Afshari, a civil activist imprisoned in Evin Prison was informed of her acquittal from a 15-year sentenced on the charge of “spreading corruption”. Hossein Taj, Ms. Kord Afshari’s lawyer states: “On Tuesday, May 26, 2020, Saba Kord Afshari contacted me from Evin Prison and informed me that she was informed of re-announcement of her previous sentence of 15 years, from which she was acquitted in the appeals court. According to her, this was done through a letter issued by the execution division, although I was informed of her acquittal in person following her court at Branch 36 of the Court of Appeal. I was informed today that the content of her verdict of the appeals court (from which she was acquitted) has changed, and I intend to follow up with the intelligence department of the Judiciary system.”

Saba Kord Afshari was arrested for the first time on August 2, 2018, alongside 50 others, during a series of protests that occurred July-August 2018 against the deterioration of Iran’s economy as well as the corruption within the government. She was first transferred to Qarchak Prison in Varamin and later, in October 2018, to Evin prison’s women’s ward. In August 2018, she was sentenced to one year in prison on the charge of “disrupting the public order” at Branch 28 of Tehran’s Revolutionary Court led by Judge Moghiseh. She was released on 14 February 2019 when Iran’s Supreme Leader pardoned a large number of prisoners in honor of the 40th anniversary of the Islamic Revolution.

On June 2, 2019, Ms. Kord Afshari was rearrested by security forces at her home and was transferred to the Vozara Detention Center in Tehran. Her house was searched during this raid, and several items of her personal belongings including her mobile phone and laptop were also confiscated. This civil activist was charged only one day after her arrest in Branch 1 of the General and Revolutionary Court of Tehran’s 21st District Court (Ershad Prosecutor’s Office) and was transferred to Qarchak Prison in Varamin for interrogation for 11 days, on June 21st she was transferred from Qarchak to the IRGC Intelligence center of Evin Prison’s Ward 2-A and was once again returned to Qarchak Prison on July 2, 2019.

Saba Kord Afshari was transferred to Evin Prison on August 13, 2019, and her trial was held on August 19, 2018. Finally, on September 26, 2019, she was sentenced by Branch 26 of the Revolutionary Court of Tehran, presided over by Judge Iman Afshari. Her sentences included 15 years of imprisonment on the charge of “promoting corruption and prostitution through appearing without a headscarf in public” 1 year and 6 months in prison on the charge of “propaganda against the state” and 7 years and 6 months in prison on the charge of ” assembly and collusion with an intent to commit a crime against the national security”, which adds up to a total of 24 years in prison along with other social deprivations. Due to the number of crimes and previous records, each charge was added by one-half. This sentence was reduced to nine years in prison in December 2019 at Branch 36 of the Tehran Court of Appeals, presided over by Judge Ahmad Zargar.

In accordance with Court of Appeals, Saba Kord Afshari was sentenced to 1 year and 6 months imprisonment on the charge of “propaganda against the regime” and 7 years and 6 months in prison on charges of ” assembly and collusion with an intent to commit a crime against national security.”Based on Article 134 of Iran’s Islamic Penal Code, the charge with the highest penalty will be considered; this means that Ms. Kord Afshari should serve 7 years and six months in prison for the charge of “assembly and collusion to commit a crime against the security of the country”. Hossein Taj, Ms. Kord Afshari’s lawyer, has previously stated: “The Court of Appeals acquitted Saba Kordafsari of a part of her charges and as a result, her sentence was reduced to 9 years, 7.5 of which are imposable by law. We also remain hopeful that the Judiciary system mitigates the sentences of Ms. Kord Afshari and other political prisoners.” Now, if the penal system fails to correct their violations, Ms. Kord Afshari, who is serving a nine-year prison sentence in Evin Prison, could face up to 24 years in prison.

It should be noted that Raheleh Ahmadi, a civil activist and Saba Kord Afshari’s mother, is also serving a 31-month prison term at Evin Prison alongside her daughter.

The following is an overview of human rights violations in Iran on January 31st, 2019 based on the information compiled and verified by Human Rights Activists News Agency (HRANA).

(1) Arash Sadeghi, a detained civil rights activist, was deprived from medical care which health professionals have said he desperately requires. He is suffering from bone cancer and infection in a surgical wound on his arm. Also, he has an urgent need for chemotherapy.

(2) Of the one million phone calls the Emergency Social Services Hotline received last year, 21 thousand were regarding child abuse and domestic violence.

(3) Saba Kord-Afshar and Yasaman Aryani, political prisoners, wrote an open letter reacting to a newspaper article that described the political prisoners’ conditions ‘favorable’, giving an overview of the hardship they face in the Evin’s women’s ward.

(4) The director of the Department of Environment of Tabas announced that two poachers were arrested in Tabas city along with a carcass of a chinkara.

(5) Parvin Mohammadi, a labor activist and the vice-president of the Free Union of Workers in Iran, was transferred to the Kachoui prison in Karaj to serve her one-month detention. She was arrested on January 29.

(6) Mohammad Ali Zahmatkesh, a teacher’s rights activist in Shiraz, was sentenced to two years imprisonment and one year of exile. His accusations are  “propaganda against the state” and “insulting the Founder of the Islamic Republic”.

(7) Shahin Barzegar, an Azerbaijani Turkic minority rights activist, began his three-months imprisonment sentence in the Tabriz prison. His charge was attending the funeral ceremony of a former prisoner, Hasan Damirchi.

(8) Soroush Agahi, a Baha’i prisoner of the Evin prison, was released on bail. He and Neda Shabani, another Baha’i citizen, have been arrested in Karaj on November 28, 2018.

(9) Amnesty International requested the release of Iranian labor activists Esmail Bakhshi and Sepideh Gholian who spoke out about abuse and torture they suffered in detention. They have been rearrested and are at risk of severe torture.

(10) A prisoner was executed in Nowshahr and a 24-year old was sentenced to death in Birjand. A prisoner who was accused of murder, was spared from hanging on gallows by consent of next of kin in Karun after 12-year in prison.

(11) A member of Iranian Parliament representing Nishabur, Hajar Chenarani, confirmed that 200 workers of Khorasan Exhaust Manufacturing Company have been laid off.

(12) A 66-year old Christian converted, Esmail Maghrebi-Nejad, was arrested by security forces in Shiraz on January 15 and his whereabouts is still unknown. His home was raided, and his belongings confiscated.

(13) Saeed Sadeghifar ,an Azerbaijani Turkic minority rights activist, was released on bail. The security forces on Tuesday, arrested him in Ardabil. His court was on January 24, on the charge of “establishing illegal groups with the intention to disturbing national security”.