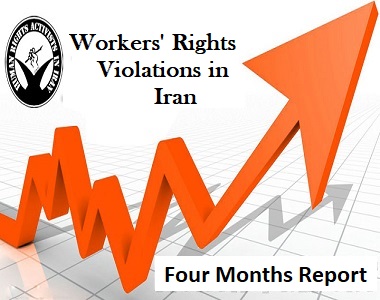 Human Rights Activist News Agency (HRANA) – The following is a four months overview of workers’ rights violations in Iran between February and May 2019, per information compiled and verified by the Statistics, Publications, and Achievements Division of Human Rights Activists in Iran (HRAI).

Domestic restrictions in Iran on independent human rights reporting make it difficult to capture the full extent of these issues on the ground. The following overview draws on the work of HRANA reporters, as well as a network of independent and verifiable sources, including other human rights associations operating outside of Iran’s borders.

Monthly Report of Workers in Iran in February 2019

Several workers were arrested and faced trial in February. Also, the purchasing power of workers was steadily decreased in this month. Abdolreza Azizi, a member of the Social Affairs Committee of the Iranian Parliament stated that workers have lost 70 percent of their purchasing power. Tens of workers died or were injured because of the lack of work safety and hundreds of them were laid off. Another ongoing problem for workers was having unpaid wages this month.

Moreover, some of the workers in Iran Powder Metallurgy Complex, factories in Asaluyeh and Pars Saveh tire factory were fired or laid off this month. 500 workers of factories in Qazvin province were suspended and 800 workers were laid off in Asaluyeh as well. On the other hand, 52 workers died or were injured because of negligence in the oversight of safety conditions in their workplaces.

Three prominent labor activists, Behnam Ebrahimzadeh, Jafar Azimzadeh, and Parvin Mohammadi were detained. The request of temporary release on bail for Parvin Mohammadi was denied by the Branch 102 of Fardis’s Criminal Court. Esmail Bakhshi, the detained labor activist of Haft Tappeh, faced three new charges: “spreading lies”, “propaganda against the state”, and “insulting to authorities”. Esmail Bakhshi’s attorney, Farzaneh Zilabi was summoned to the Branch three of the Shush county’s Revolutionary and General prosecutor’s office. In the same month, officers of Shush prosecutor’s office physically attacked Bakhshi’s sister and handcuffed his mother. This happened when his family was following up on his lawsuit. Later the family of this labor activist were summoned to the court.

In February, the attorney of several workers of Arak HEPCO reported that the cases of seven workers of this company were transferred to the Revolutionary Court. In 2018, 15 workers were sentenced to prison and lashes after last year’s protests. The appellate session of Davood Razaei, a board member of the syndicate of workers of Tehran and suburbs bus company, was held in the Branch 36 of Tehran Appellate Court. He was sentenced to five years in prison by the Branch 26 of the Revolution Court. Eghbal Shabani, labor activist in Sanandaj was arrested and Zaniar Dabaghian, another labor activist from Sanandaj, was sentenced to one-year prison term. A journalist was arrested in Qazvin because of reporting workers’ news in this month.

Monthly Report of Workers in Iran in March 2019

Several workers and activists were arrests, summoned, sentenced, received lash sentences, and were fired during this month.  Because of the lack of work safety, many workers died or were injured. Also, it has been stated that tens of thousands of workers encountered financial hardship because of their unpaid wages.

Ali Kashefi, chairman of Mashhad laundries union, reported that 50 businesses were closed, and their workers were unemployed; due to last year’s high inflation. Some of the waste collectors of Sadra municipality who already have three months of unpaid wages and were protesting for their unpaid wages were fired. At the middle of March, which is the Persian new year, chairman of the pioneers of labor union of workers society announced that at least 97300 workers had unpaid wages prior to the New Year’s Eve.

Jafar Azimzadeh, chairman of the Free Workers Union was sentences to 30 lashes. Parvin Mohammadi, vice president of this union was released on bail. Meanwhile, Esmail Bakhshi was transferred from Shush prison to Sheiban prison in Ahvaz.

Moreover, several citizens were arrested protesting against firing waste collectors of Sadra municipality. Rahim Khodabakhshi, general secretary of Shiraz University’s Arman union, Ehsan Ziaraty, head of Shiraz University’s Basij Student Organization, and Hamid Mohammadpour, former secretary of Arman union were among the detainees. Ebrahim Abbasmanjazi, one of the workers of Haft Tappeh was summoned to Shush’s prosecutor’s interrogating office by a notice. After interrogation and charging accusations, he was temporarily released.

The Banch 36 of Tehran’s Appeals Court sentenced Davood Razavi, member of Tehran ‌Bus Company’s workers’ labor union board, to five years in prison. According to the verdict, this decision is suspended for five years. Also, Maziar Seyyednejad, a labor activist who was arrested 3 months ago for workers’ protests in Khuzestan, was released from Sheiban prison of Ahvaz on bail until completion of the juristic process. He was treated terribly during his prison time.

Two other labor activists, Ghodratollah Jalalvand and Reza Amjadi, were arrested in this month by security officials and were moved to an unknown location. Reza Amjadi was released after a few days by bail until completion of the juristic process.

Monthly Report of Workers in Iran in April 2019

One of the most important news in this month was arresting and summon of labor activists and the security authorities’ pressure to prevent celebratory events for the international Labor Day. Tehran Bus Company’s workers’ union invited workers to protest by the Parliament building on May 1st. Some of the businesses were shut down and a lot of workers were laid off in this month, because of high inflation and rising costs of production.

105 workers died or were injured because of the lack of work safety. The worker of Oshnavieh municipality, Iran Powder Metallurgy factory, Ilam industrial slaughterhouse, Tehran Metro lines 1 and 4 services, Ahvaz Steel,Rasht and Sari municipalities, Cement production factory of Kohgiluyeh and Boyer-Ahmad province, Iranian railway company, Dehdasht hospital, Iran telecommunication company, and teachers of the schools outside Iran had unpaid wages this month. Chief executive officer of Hamshahri institute, the official news agency of Tehran municipality, stated that 104 of this institute’s personnel were laid off. 50 workers of Mojan engineering company, construction contractor of the central sewage treatment plant in the Bandar Emam petrochemical plant and 35 other workers in Keyvan food industries in Hamadan province were laid off.

Executive secretary of Mazandaran province worker’s house announced Neka Choob company was out of business and its workers were laid off. Tehran Bus Company’s workers’ union invited the workers to attend a protest by the Parliament on May 1st, in commemoration of the international Labor Day.

Amir Amirgholi, Sanaz Allahyari and Amirhosein Mohammadifar, members of “Gam”, a labor right defendant magazine, were detained. Thus, detention was one of the most important news on workers in April. Amir Amirgholi and Esmail Bakhshi were transferred from Ahvaz prisons to Evin prison in Tehran and their investigation trial was held in the Evin prosecutor’s office. Three labor activists, Ghaleb Hoseini, Mozafar Salehnia and Ahmad Taghizadeh, in the cities of Sanandaj and Urmiah were summoned by these cities ‘security authorities before labor’s day. Twelve labor activists in Jahannama Park of Karaj were arrested as well. Four of them, Parvin Mohammadi, Valeh Zamani, Alireza Saghafi, and Haleh Safarzadeh, were detained.

Monthly Report of Workers in Iran in May 2019

‏ The most important news in this month was the arrest of more than 50 labor activists and citizens on the international labor’s day celebration in May, by the Parliament. Meanwhile, hundreds of workers were laid off because of businesses’ shut down. In this month, Reza Shahabi attended the General Conference of Labor in Dijon/France.

106 workers died or were injured because of negligence in the oversight of safety conditions in their workplaces. On the other hand, more than 50 workers of “Navard Ivan” steel company who were working for more than 10 years in this factory, were laid off because of this factory being out of business. Also, more than 100 workers of Mahshahr Pipe Mill and Kurdistan Alborz tire, and 140 workers of Mahshahr petrochemical plant were laid off in this month. Meanwhile, 263 laid off workers of Asaluyeh South Pars, who had unpaid wages and premiums, wrote a letter to the minister of oil and demanded their rights. They wrote in their letter, that they “collect bread waste” for living.

‏In this month, Reza Shahabi attended the 52nd  Congress of the General Confederation of Labor in Dijon/France as the representative of the Tehran Bus Company’s workers’ union. He reported that Farahnaz Shiri, the first female bus driver in Tehran Bus Company was fired because of her gender. He also spoke about the problems and limitations of workers in this company.

‏Unpaid wages of the teachers around the country, workers of Ghoo vegetable oil company of Tehran, Ilam slaughterhouse, RSTC of Arak, Tabriz, and Shazand, Mahabad and Tabas municipalities, sugar beet farmers of Naghdeh sugar production company, coal mine workers of Malach Aram mine, physicians of Yazd University of Medical Sciences, and Karj Imam Khomeini hospital workers, wee one of the other problems which workers were encountering this month.

‏More than 50 people were arrested during the international labor day’s ceremony which was held by the Parliament. Despite release of some of the detainees by bail, some others like Marzie Amiri, Keyvan Samimi, Hasan Saidi, Atefe Rangriz, Nasrin Javadi, Nahid Khodaju, Neda Naji and Farhad Sheykhi were in custody, being in prions for about a month.

Representatives of labor unions of many countries around the world attending the 52nd Congress of the General Confederation of Labor in Dijon/France and Amnesty International, released two separated statements and demanded setting detainees of international Labor Day free without any conditions. Cases of labor activists, Esmail Bakhshi, Sepideh Gholian, Amir Amirgholi, Sanaz Allahyari, Amirhossein Mohammadifar, Asal Mohammadi and Ali Nejati, were sent to the Tehran’s Revolution Court. Although a bond was set for the detainees, the head of Evin prosecutor’s office prevented their release on bail. In addition, two labor activists in Sanandaj, Tofigh Mohammadi and Eghbal Shabani, were sentenced to two years in prison. More than 10 workers of Haft Tappeh were arrested or summoned by security authorities. There exact number of these workers is not known. They were arrested or summoned because of protesting the Islamic Labor Council of Haft Tappeh. Eshagh Rouhi, a labor activist from Sanandaj who was arrested at the same time of international Labor Day, was unable to pay the set bail and was held in prison. The trial of labor activist, Maziar Seyyednejad, was held in this month by the Revolution Court of Ahvaz.