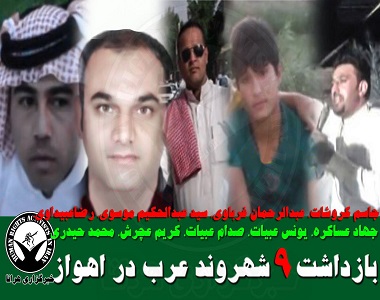 HRANA News Agency – Reports indicate more pressure on Arab citizens, especially in the south of Khuzestan province. At least 9 civilians were arrested by security forces and there is no information about the status of three of them. Also, the revolutionary court sentenced a social activist and poet to two years in prison. Bagher Gholami’s family has stated that after 6 months from his arrest, there is no information about him.
According to the report of Human Rights Activists News Agency (HRANA), Jasem Krooshat, Abdulrahman Gharbavi, Seyed Abdulkarim Mousavi, Reza Obaidavi, Mohammad Haidari, Jabbar Abiyat, Sadam Abiyat and Karim Achrash have been arrested by security forces during past month. END_OF_DOCUMENT_TOKEN_TO_BE_REPLACED