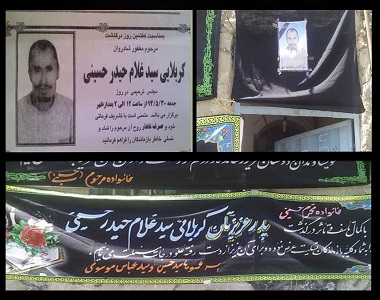 HRANA News Agency – An Afghan citizen died as the result of lack of oxygen and heart attack in Sefid Sang of Fariman, refugee camp.
According to the report of Human Rights Activists News Agency (HRANA), Seyed Gholam Haidar Hossaini, 55, citizen of Afghanistan, died in Sefid Sang of Fariman, refugee camp in Khorasan Razavi province, as a result of heart attack, caused by lack of oxygen in closed area of the camp, and delay in taking him to the hospital. END_OF_DOCUMENT_TOKEN_TO_BE_REPLACED