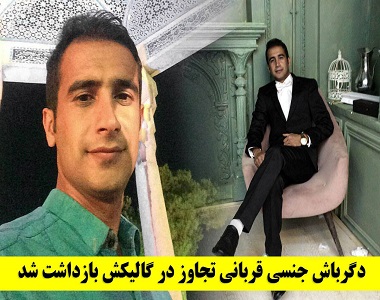 HRANA News Agency – Valiullah Vaziri, transsexual resident of Galikesh in Golestan province who had been collectively raped, was ridiculed after going to the police. After protests from this citizen to their disregard, he was detained and transferred to general crime prison in Gonbad-e-Kawoos.
According to the report of the Human Rights Activists News Agency in Iran (HRANA), he was beaten and raped by a group in the village of Quli Tapeh of this city, on Wednesday August 3.
He believed that he was raped because of his gender and sexual orientation in a despicable action, so he had gone to the police to report and register his complaints. However, officers accused him of committing the unlawful act (buggery with satisfaction) and ridiculed him, but they faced his protests.
In response to the protests by Mr. Vaziri, police officers beat him and formed a case against him and arrested him on charge of sodomy and transferred him to the general crime prison in Gonbad-e-Kawoos.
Mohammed Ashour, Mr. Vaziri’s father, in an interview with HRANA’s reporter confirmed the news and added: “We are waiting him to be released on the bail and we are going to sue the officers because of their behavior.”