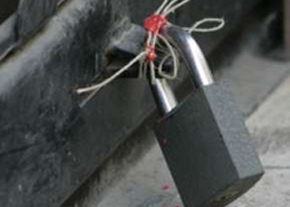 HRANA News Agency – 16 Bahai-run businesses in Qaem Shahr have been shut down by the authorities because they were closed for the Bahai holy day of the first day of Ridvan.
According to the report of Human Rights Activists News Agency in Iran (HRANA), in recent years the local departments of public places in Iran have closed down many of the small workshops and shops on which Bahais must rely for their income, since they are barred from employment in the civil service and in many economic sectors.
Bahais are also barred from running businesses in sectors that involve contact with food or personal services, in line with a commonly held superstition in Iran, that Bahais are “unclean.”
The owners of these shops are named as Shahin Senasi, Sohrab Leqa’i, Changiz Derakshani, Bijan Now`khah, Nima Miri, Sahil Haqqdust, Baha’ul-din Samimi, Behnam Mirza’i, Kurosh Ahmadzadegam, Adel Atta’eyan, Kurosh Reza’i, Fariborz Sana’i, Rezvan Golpour, Shahin Akbari and Farzad Sabeti.