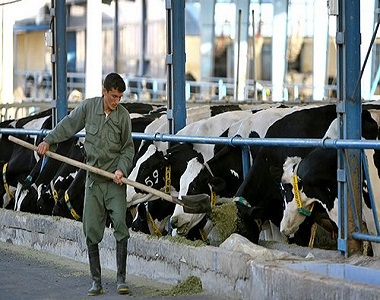 ILNA labor section approach this production lines complex in critical situation as it gets closer to international labor day and interviewed the workers envoy of Mahabad ranch to find out the details about their issues.

Workers envoy of Mahabad ranch said “43 workers in this ranch did not get their wages for 16 months under the excuse of lack of financial resources.”

He explained the details of the problem workers of this production line faced and said “The unpaid wages refer to March till July of 2011 and 2012 with the festive and in the ongoing year they did not get their wages at all.”

“With privatizing this ranch production line the problems showed up for the workers that the employer did not pay 16 months of workers’ wages without any consideration about their family condition and daily life”, he continued.

He mentioned the long-term work experiences of the workers -17 to 26 years- and declared that “Workers job safety is in more serious danger as the problems showed up that two of experienced workers with more than 17 years working experience fired right after their contracts ended because of their objection about the increased problems.”

This complex of Mahabad ranch production line belongs to Ghadeer Sabz company, and including industrial subsets as Homa Morgh, Zamzam fridge and Kesht San’at Mahabad that since 2007 with the fluctuations in the market and starting to import meat widely, the production has privatized and because of being unable to find financial resources has faced problems which ended up firing the workers slowly and continuously that right now the 43 workers of this complex of ranch have huge issue and struggles in their families daily life because of unpaid wages of 16 months.