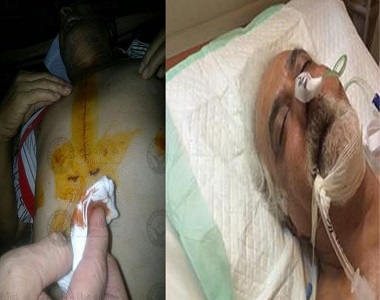 HRANA News Agency – Karim Maroof Aziz and Mashallah Haeri were returned to Rajai Shahr prison from hospital.
According to the report of Human Rights Activists News Agency (HRANA), Karim Maroof Aziz and Mashallah Haeri, two political prisoners of Rajai Shahr Prison, who were recently referred to Medical Centers, out of the prison, were returned to the prison.
Karim Maroof Aziz previously had open heart surgery and before getting complete treatment was taken back to prison that caused bleeding in his leg which medics took its vessel for his heart. So that he was sent to hospital again.
An informed source told HRANA’s reporter, “Karim Maroof Aziz’s leg is still bleeding”.
Earlier, an informed source had told HRANA’s reporter regarding Mashallah Haeri: “Mashallah Haeri, who suffers from a heart condition nowadays is in black mood as his daughter, Negar Haeri, has been arrested and is kept in very bad condition in Qarchak prison, in Varamin. Also, prison officials disregard for providing medical care and treatment, has cluttered his physical condition to the extent that due to some unknown reasons, yesterday his general health condition deteriorated, so prison officials had to take him on a trolley to the Medical Center.”
Mr. Haeri was returned on October 21st. to the prison after receiving basic medical attention.