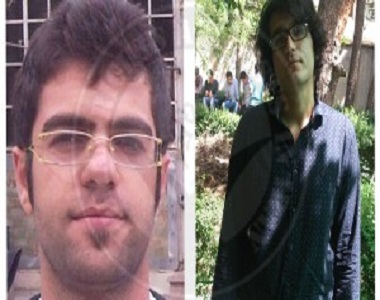 HRANA News Agency – Hossein Jandaghian and Siamak Molamohammadi, two students who had been arrested in Tehran and Karaj, were released on the bail.

According to the report of Human Rights Activists News Agency in Iran (HRANA), Hossein Jandaghian and Siamak Molamohammadi, two students who had been arrested during the recent wave of detention of the student activists in Tehran and Karaj, were released on the bail of 100 million Tomans, for each of them, from ward 2A of Evin Prison.

4 other student activists, named; Mehraban Keshavarzi, Sepehrdad Saheban, Kiana Karimpour, and Ghazal Moghadam, who had been arrested at the same time, were released earlier on the bail.

Siamak Molamohamadi, graduate in Electrical engineering of Khajeh Nasir University and undergraduate student of Nuclear Engineering at the Polytechnic University, was arrested while he was adopted in Master level after interrogation and giving assurance last year, after three years deprivation of education.

Also, Hossein Jandaghian, a student of Power at Khajeh Nasir University, who just recently after a two-semester suspension and deprivation of all facilities, had returned to the university is still in prison.