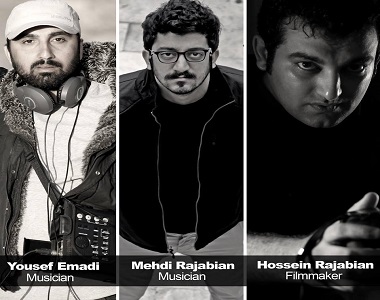 HRANA News Agency – Three artists have been sentenced each to three years in prison, three years prohibition from activities and 20 million tomans fine by Branch 54 of the Tehran Appeals Court. According to informed sources the final sentence of the musicians Mehdi Rajabian and Yusef Emadi and filmmaker Hossein Rajabian, before delivering them, has been sent to the executive branch in Evin Court (Shahid Moghadasi Court).
According to the report of Human Rights Activists News Agency (HRANA), each of the three artists had been sentenced to six years in prison in the first stage by Branch 28 of the Revolutionary Court presided by Judge Moghiseh, on charges of insulting religious sanctities and propaganda against the regime.
Amnesty International recently published a report calling for the abolition of judicial rulings of three artists and has stated that Hossein Rajabian, Iranian film maker and musicians Yusef Emadi and Mehdi Rajabian due to artistic activities have been sentenced to prison and if imprisoned, they will be prisoners of conscience.
Mehdi Rajabian, Hossein Rajabian and Yusef Emadi were arrested in October 2013 at their office in Sari and were kept for 18 days in an unknown location under interrogation, torture and ill-treatment including electric shocks, then they were transferred to ward 2-A of IRGC in Evin prison.
They were released on the bail of 200 million tomans after two months in solitary confinement and interrogation in ward 2-A.
According to a source, they were under pressure during interrogation for a televised confession and interrogators had threatened them that if they would not participate in televised confessions, they would be sentenced to life imprisonment.
In December 2015, Branch 28 of the Revolutionary Court sentenced them to six years in prison and a fine on charges of “propaganda against the regime” and “insulting religious sanctities”.
An informed source told our reporter: “The primary court lasted just few minutes and the presence of a legal representation was also pointless.”
The first appeals court was held on December 21, 2015 at Branch 54 of the Appeals Court presided by Judge Babaei.
They were denied access to a lawyer and at the appeal court session the judge had told them that in all stages of the proceedings having a lawyer was “meaningless” and they had to provide full explanations themselves. Although they emphasized that the confessions have been obtained under pressure, the confessions were considered as evidences against them.
165 musicians, filmmakers, scholars and Iranian activists signed a petition last October to announce their protest to the heavy sentences issued for Mehdi Rajabian, composer, musician, Setar player and founder of Media Barg Music; Hossein Rajabian, filmmaker and Yusef Emadi, composer, and demanded the immediate and unconditional release of them and an end to this way of dealing with artists.
Barg Music (official reporting music foundation) has been the only alternative for Iranian music distribution media and was promoting the new music genre and in its five years of activity (from 2008 to 2013) there had been specifically hundreds of albums and thousands of singles from alternative music artists published in this website.