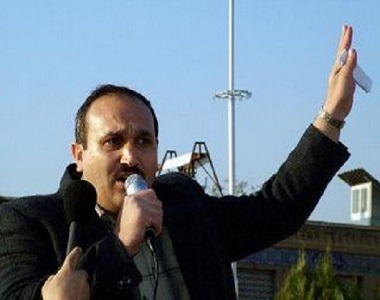 HRANA News Agency – Abbas Lesani, Turkish (Azari) civil activist ended his hunger strike after being returned to the ward and getting the right of having phone calls. The civil rights activist, resident of Ardebil was sentenced to one year in prison on charge of “propaganda against the regime” and was exiled to Shiraz prison.
According to the report of Human Rights Activists News Agency (HRANA), Abbas Lesani had declared a hunger strike following his transfer to “Ebrat” ward of Shiraz prison and being disconnected with the outside of prison from February 24.
Abbas Lesani is prohibited from having prison visits since his exile to Shiraz prison on November 12.
His family have been summoned to the judiciary for several times over the past months.
Abbas Lesani who had refused to participate in any of the 3 trials, because of the court’s failure in respecting Article 168 of the constitution of the notion of public hearings, was sentenced to one year imprisonment on April 25, 2015 by a court verdict, issued by Branch 1 of the Revolutionary Court in Ardebil, presided by Judge Asadpour.
The civil rights activist and father of three children, who had been arrested and imprisoned numerously, the last time, was arrested in Ardebil, on 9th September, following the protests against drying of the lake of Urmia. He was charged with propaganda against the regime and forming a group to disrupt the security national. He was released on 5th November, after 55 days of detention in Ardebil Intelligence service, on the bail of 100 million Tomans.