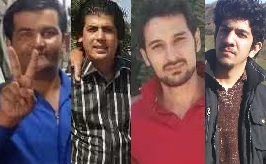 HRANA News Agency – There are some reports regarding the arrest of six activists in recent days, while this year the security forces have prevented holding the annual ceremony of “Ghaleh Babak” , Babak Castle, in East Azerbaijan province.
According to the report of Human Rights Activists News Agency in Iran (HRANA), on Wednesday 29th July, security officers went to print office of Mr. Bayram Gharacheloo in Shahriar and arrested him along with several other civil activists named Behnam Abdollahmohammadi, Ali Asghar Biddle and Mehran Bambaei.
Plainclothes agents armed with a pistol, took some documents and published booklets, while were arresting Mr. Abdollahmohammadi, Biddle, Bambaei and Gharacheloo, and according to the statements of the witnesses, one of the detainees was severely beaten by the agents.
At the moment there is no information published about the reason of the detention and their location, and their families’ pursue from justice centers and police, only led to confirmation of their arrest by the Iranian Revolutionary Guards.
Also, two others named Abbas Shadmand and Akbar Abolzadeh were arrested on Friday 17th July, by the security forces, around the city of Kaleibar. Both of them have been summoned and detained several times during the recent years and there is no news about the reason of the arrest.
It is to say that, Babak Castle or Republic Castle’s ceremony, as a symbol of freedom, that every year mid-July in the city of Kaleibar in East Azarbaijan is celebrated, often has faced with certain restrictions or prohibitions by the government and this civil gatherings like other rallies such as International native Language day, is along with intimidation and arrests and threatening the civil activists.