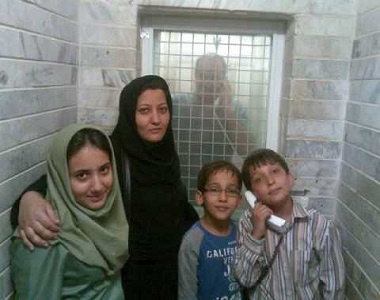 HRANA News Agency – Roqayeh Alizadeh, the wife of Turkish (Azari) political prisoner in Shiraz prison, was summoned to the revolutionary court in Ardebil by calling. Ms. Alizadeh said that the court had probably summoned her because of the complaint of the intelligence, but she was not summoned in writing and formal, so she would not go to the court.
According to the report of Human Rights Activists News Agency (HRANA), Roqayeh Alizadeh, the wife of Abbas Lesani, was summoned to the branch 2 of the prosecutor of revolutionary court in Ardebil by a telephone call.
The time of reference was announced as 3rd of February at 10 o’clock and according to Alizadeh, probably she was summoned because of the complaint of intelligence office.
Abbas Lesani, imprisoned civil activist who was transferred from Ardabil prison to Shiraz prison without any notice on Thursday, 12th November is incommunicado. He has been prevented from having prison visits from the moment of his exile to Shiraz prison.
Abbas Lesani, civil activist who had refused to participate in any of the 3 trials, because of the court’s failure in respecting Article 168 of the constitution of the notion of public hearings, was sentenced to one year imprisonment on 25th April 2014 by a court verdict, issued by Branch 1 of the Revolutionary Court in Ardebil, presided by Judge Asadpour.
Abbas Lisani, civil activist and father of three children, who had been arrested and imprisoned numerously, the last time was arrested in Ardebil on 9th September, following the protests against drying of the lake of Ormia. He was charged with propaganda against the regime and forming a group to disrupt the national security. He was released on 5th November, after 55 days of detention in Ardebil Intelligence service, on the bail of 100 million Tomans.