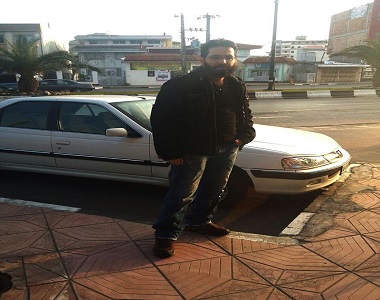 HRANA News Agency – Close sources to Amir Golestani said that the authorities in Evin prison had accepted the parole and he were waiting for the approval of the prosecutor. Amir Golestani is among the so-called Facebook activists, who has been arrested and detained since 2014.
According to the report of Human Rights Activists News Agency (HRANA), Amir Golestani who has been sentenced to 7 years and 9 months in prison for the administration of Facebook pages, is currently serving the sentence in ward number 8 of Evin prison. Prison authorities accepted the parole and by the approval of the prosecutor, he would be released.
Amir Golestani was arrested by the intelligent service, and transferred to ward 2-A, in Evin prison, on August 20, 2013. He, along with few others, were under pressure for confession against themselves, in a case that was called Facebook activists, in ward 2-A for quit a long time. They were transferred to ward 350, after the interrogations ended in December.
Collusion and acts against the national security, propaganda against the Islamic republic of Iran, sacrilege, insulting the late and current supreme leaders, insulting the head of the government, parliament and judiciary, distribution of immoral picture by computer, are the charges that these people faced.
The case was sent to branch number 6 of Shahid Moghadasi of Evin court and prosecutor Naseri, and then to branch number 28 of the revolutionary court.
Judge Moghiseh, the head of branch number 28 of the revolutionary court sentenced these people to the accumulation of 128 years in prison. Amir Golestani was also sentenced to 20 years and one day in prison.
Branch number 54 of the court of appeal with judge Poorarab, applied the article 134 to Golestani’s case and sentenced him to 7 years and 9 months in prison. He was transferred to ward 350 after the final sentence was issued.
Amir Golestani, born in 1980, was the developer of Facebook pages of Zendegi Sagi (dog stylish life) and Zendegi Shirin (Sweet life) and had satirical perspective toward political and social issues. He is currently serving his 3rd year in ward number 8 of Evin prison.