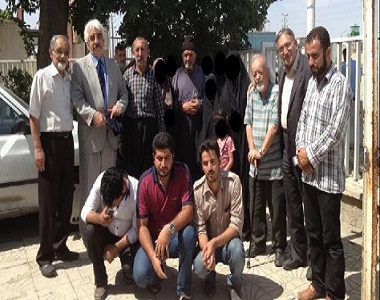 HRANA News Agency – The families of four Sunni prisoners on the verge of execution were joined yesterday by a number of Iranian political activists outside Ghezel Hesar Prison in Karaj.

The families have been gathered outside the prison for the past three days in protest at the imminent executions. Despite pressure from Iranian security forces, the families have refused to leave until the death sentences are revoked and until the men are returned to Rajai Shahr Prison in Karaj.

The four men, Jamshed Dehghani, Jahangir Dehghani, Kamal Molayee and Hamed Ahmadi, are currently held in solitary confinement in Ward 1 of the prison, and are being made to wear clothes specific for execution. They are in danger of imminent execution.