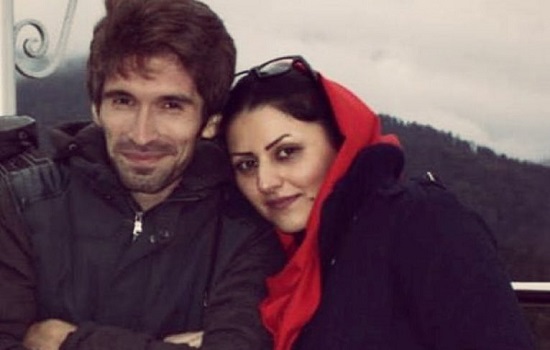 HRANA News Agency – Arash Sadeghi, prisoner of ward number 350, and Golrokh Irai prisoner of women’s ward in Evin prison are banned from monthly visits based on an arbitrary order of the prosecutor. This ban is applied while Arash Sadeghi is suffering from different diseases following a long term hunger strike, and is still denied by Sarallah corps of revolutionary guards from being transferred to hospital. This illegal deprivation has raised concerns about the health condition of Arash Sadeghi.
According to the report of Human Rights Activists News Agency (HRANA), Arash Sadeghi, civil rights activist who is imprisoned in ward 350 of Evin prison and his wife, Golrokh Irai are deprived from visiting each other by prosecutor’s order, since the arrest of Ms. Irai on December 23.
Considering that Mr. Sadeghi has lost a lot of his weight, in addition to diseases that he has as a result of hunger strike like chronic inflammation of the airways (asthma), bleeding in the stomach and intestinal colitis, this ban has raised concerns about his condition that it might be more critical than what it was thought.
Previously, HRANA had reported that Arash Sadeghi had been transferred to clinic following deterioration of his condition. Resident physician in prison clinic emphasized on extreme protein poverty.
In the last transfer of Arash Sadeghi to the hospital, specialist physician confirmed that he was experiencing stomach bleeding of 12.5% and was suffering from severe anemia, lung infection and had to be hospitalized at least for 4 to 5 days.
In spite of this condition and resistant of doctors in the hospital, by the pressure of prosecutor, security of prison and Sarallah corps, he was sent back to Evin prison.
On the other hand, Golrokh Ibrahimi Irai, was arrested by security forces without any prior notice on October 24 and transferred to Evin prison to serve her sentence.
Arash Sadeghi ended his hunger strike after Golrokh Irai was sent to furlough on January 3.
But despite the given promise, the furlough was not extended and therefore Golrokh Irai was arrested in her house and transferred to prison on January 22.