Fire-fighters and rescuers are buried under trash 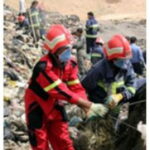