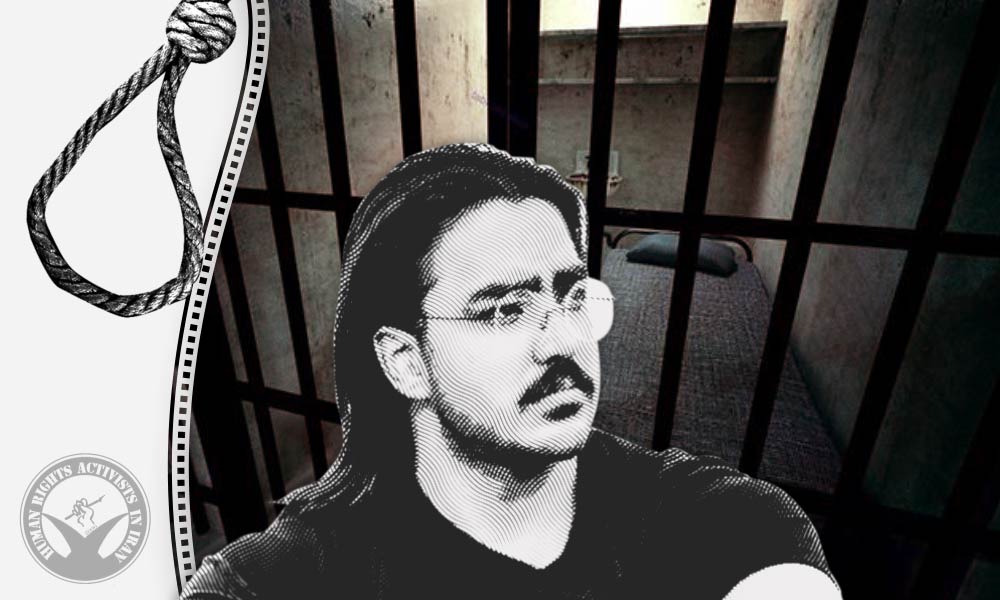 According to HRANA, the news agency of Human Rights Activists, Majid-Reza Rahnavard, age 23, was executed in Mashhad.

An informed source told HRANA the court had already determined his guilt, and he was not allowed to defend himself. Rahnavard’s trial began only ten days after his arrest.

Rahnavard has been accused of killing two Basij militia forces in Mashhad during protests. Nonetheless, the assailant’s face cannot be identified by any CCTV cameras that captured the scene.

Earlier, pro-government mobs assaulted his family’s apartment and broke doors and windows to terrorize his family.

On Tuesday, November 22, 2022, the intelligence agents arrested Baha’i citizen Sanaz Tafazoli in Mashhad and took her to an undisclosed location. The agent searched her house and confiscated some of her and her son’s belongings.

According to HRANA, the news agency of Human Rights Activists, Baha’i citizen Sanaz Tafazoli was arrested in Mashhad.

After three days, Tafazoli’s whereabouts is still unknown.
She has faced other arrests and convictions on a prior occasion. 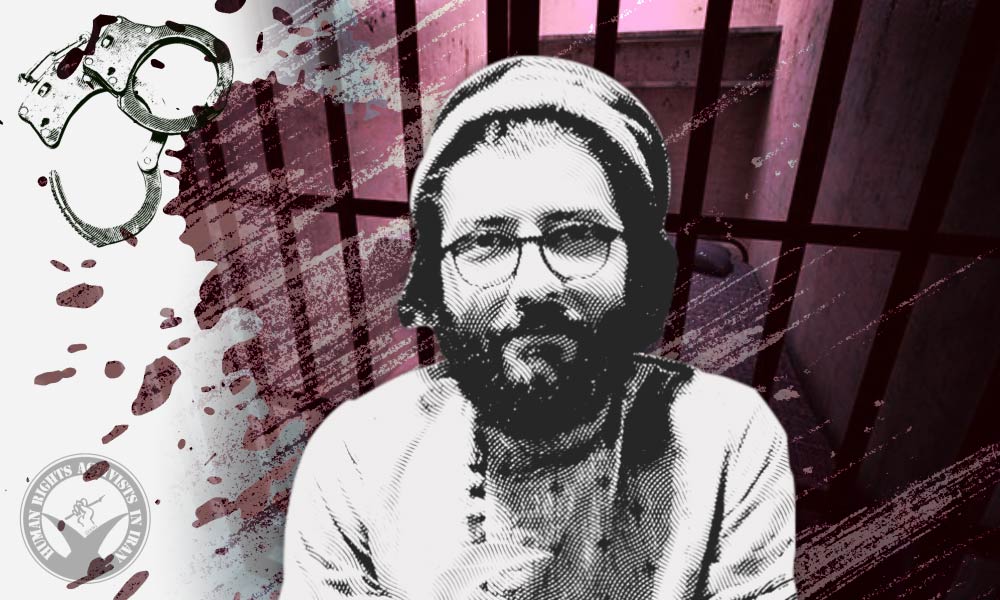 On October 23, 2022, security forces arrested writer Arash Ramezani in Mashhad and took him to an unidentified location.

According to HRANA, the news agency of Human Rights Activists, writer Arash Ramezani was arrested in Mashhad.

According to an informed source, Ramezani was arrested at his workplace. The reason for this arrest and the charges are still unknown. Ramezani, living in Mashhad, has published two fiction books. 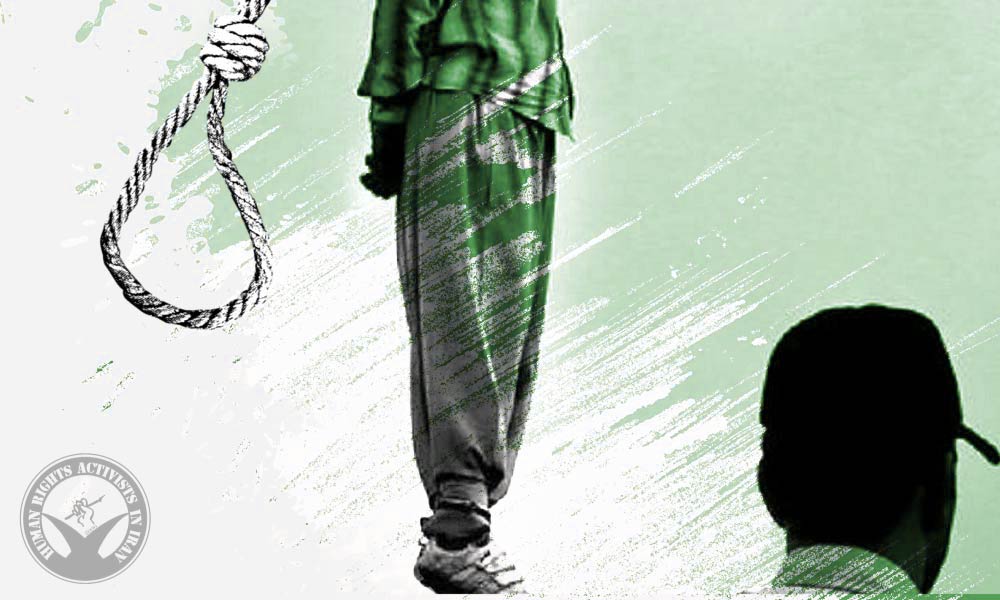 On Sunday, October 2, five inmates convicted of drug-related crimes were executed in Vakilabad Prison in Mashhad.

According to HRANA, the news agency of Human Rights Activists, quoting Haal Vsh, on October 2, 2022, five inmates, of which four have been identified as Asef Shakib, Saeed Shakib, Ramezan Mazarzeh and Avaz Bilrani, were executed in Vakilabad Prison in Mashhad.

All of these prisoners had been convicted of drug-related crimes.

The map below shows the geographical distribution of protests across Iran during the last 48 hours. 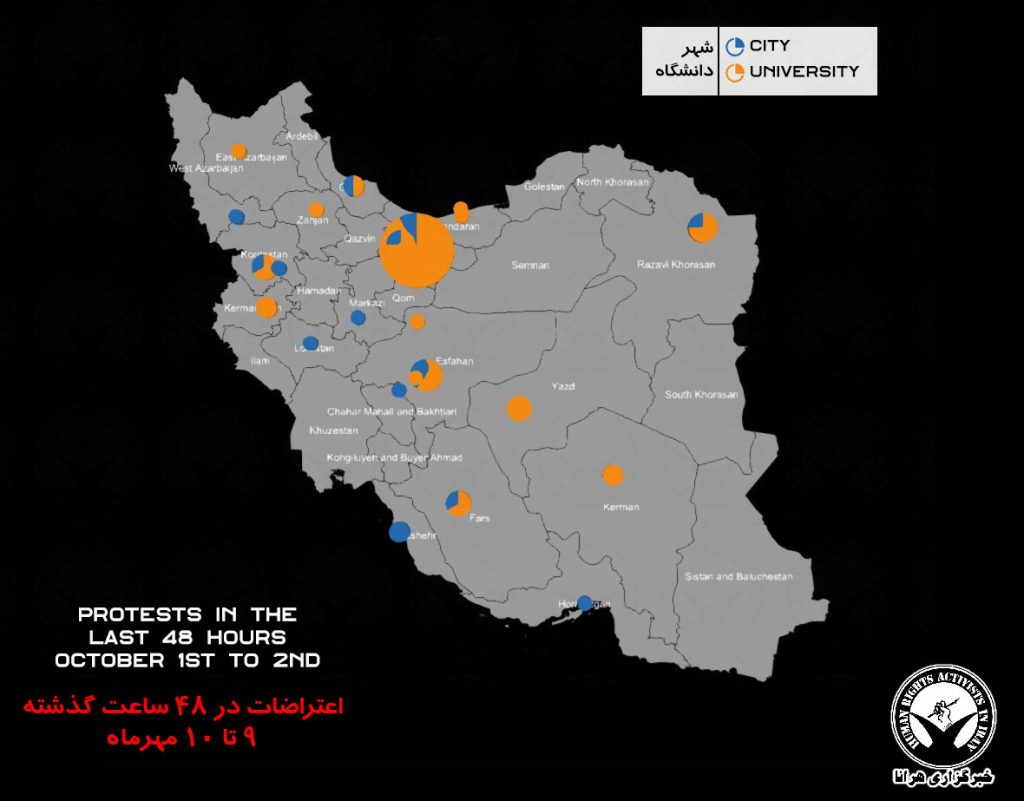 In most cases, peaceful student protests turned violent by the police as dozens of students were arrested by the security forces. On the University of Isfahan campus, the security agents or the police fired tear gas at the crowd of protesting students.

Last night, the police and security forces surrounded the Sharif University of Technology, chasing and arresting violently the students who left the campus. The police fired tear gas and pellet guns, leading to several students’ injuries.

According to Iran’s Student Union, several protesting students were trapped in a university building by university security agents and then arrested by the police.

The students chanted slogans such as “Death to the dictator”, “don’t call it protests, it is now a revolution”, and “jailed students should be freed.” They also chanted slogans against the Supreme Leader, Khamenei.

On October 2, in Isfahan and Piranshahr, traders and shopkeepers joined the general strike and closed their shops.

Like the previous days, most parts of the country, especially Kurdistan, faced internet and mobile phone disruptions and outages.

Last Friday, September 30, in Zahedan, in Sistan and Baluchistan province, the security forces opened fire at the crowd of protestors coming from the Friday prayer. According to Iranian Sunni cleric Molavi Abdul Hamid, at least 40 people were killed in this incident.

The number of people arrested is increasing day on day. HRANA identified 31 arrests alone for yesterday.

Kurdistan police chief claimed that more than 150 people arrested during the “unrest” have been released.

It is estimated that 30 to 40 students at the Sharif University of Technology were arrested.

Anti-riot police and security forces use live ammunition against the protestors. HRANA has identified 150 death tolls, of which some have been verified by HRANA after fact-checking.

Below is the compilation of the videos from the protests in the past 24 hours. 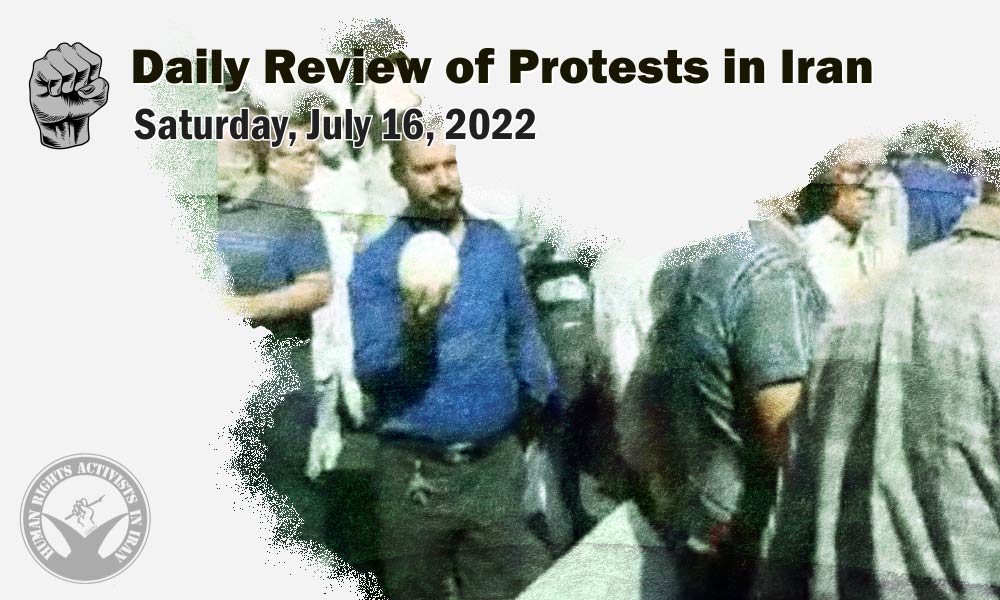 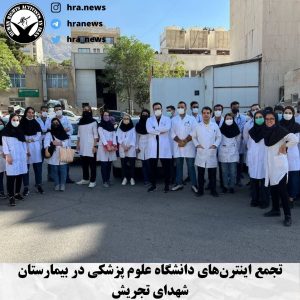 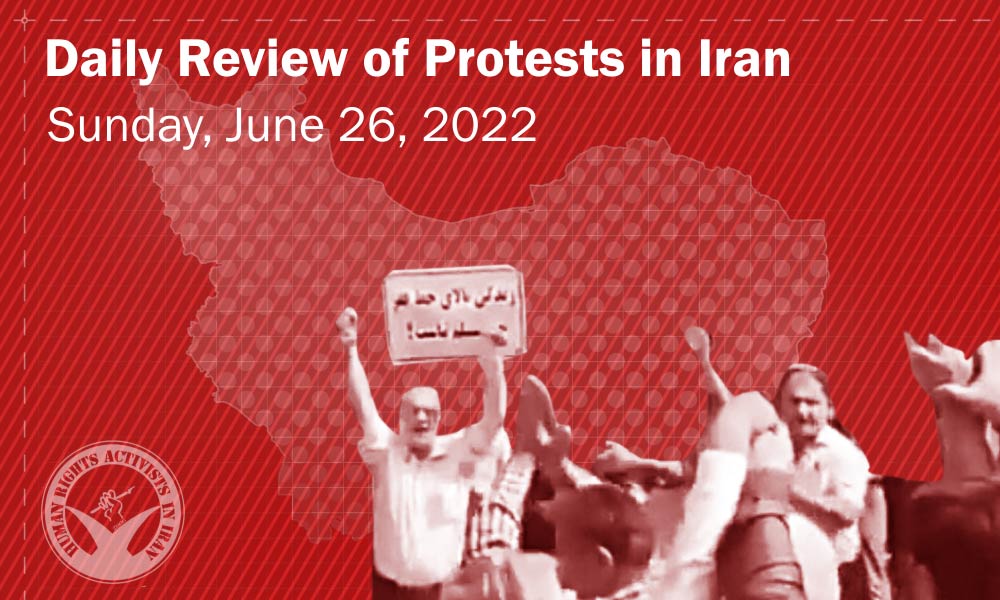 On Sunday, June 26, 2022, a number of protests took place in Iran. Read our review below for details, photos, and videos from these demonstrations:

The pensioners of the Social Security Organization continued their protest in Ahvaz, Shushtar, Kermanshah, Rasht and Ardabil. They protested against the government’s decision to increase the pensions by only 10 per cent, which falls below the amount that the Supreme Labor Council has enacted.

A number of driving school instructors held a protest in Mashhad. They protested against low wages and increasing car maintenance costs.

A number of teachers working in overseas schools gathered in front of the Courthouse of Tehran to protest against not addressing their demands. 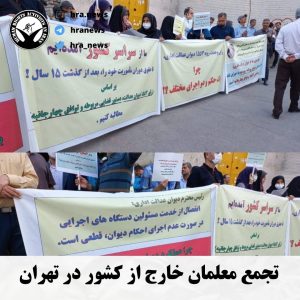 A group of students of Islamic Azad University in Kish gathered at campus to ask for holding in-person exams.

The insulation workers of petrochemical companies went on strike to demand an increase in wages. 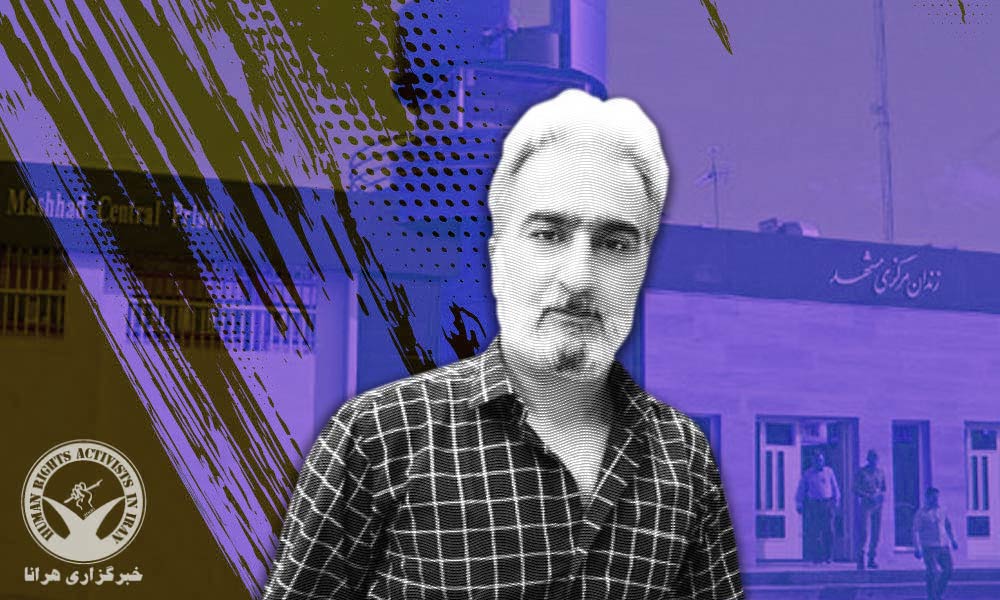 On February 26, educator and civil activist Abbas Vahedian Shahroudi was hospitalized in critical condition in Mashhad City. However, on Monday, while he was in needed treatment, he was forcefully sent back to a detention centre by security forces. He has been held in a solitary confinement cell for six months in a detention centre in Mashhad.

According to HRANA, the news agency of Human Rights, a source close to his family reported that he was dispatched to a hospital following symptoms such as poisoning, shortness of breath and low heart rate leading to partial consciousness. Security forces did not allow visitation or let him inform his family. Monday, he was sent back to his cell despite uncompleted treatment.

Earlier, HRANA reported his poor health condition in a solitary confinement cell in a detention center at the disposal of the Ministry of Intelligence.

On September 1 of this year, intelligence agents arrested Vahedian in Rezvanshahr County. Two days later, in a phone call to his family, he informed them that a news case had been opened against him on a charge of “acting against national security”. Meanwhile, his daughter’s home in Mashhad was searched by security forces and some personal belongings were confiscated.

Vahedian has previously been arrested and convicted for his writings and civil activities. In one case, he was arrested in Mashhad in October 2018 and later charged by Branch 903 of the Revolutionary Court of Mashhad with “acting against national security”, and “attempting to overthrow the regime”. He was released on bail of 350 million tomans from Vakilabad Prison in Mashhad in December 2018.

Shortly after his interrogation, in August 2019, Vahedian was again arrested and transferred to Vakilabad Prison. He was one of the 14 signatories of a letter of request for the resignation of Ayatollah Khamenei, the supreme leader of Iran. He was released on bail from Vakilabad Prison in July 2020.

Vahedian is an author of several books including “The Return of Genghis Khan”, published by Khatam Publishing in Mashhad. 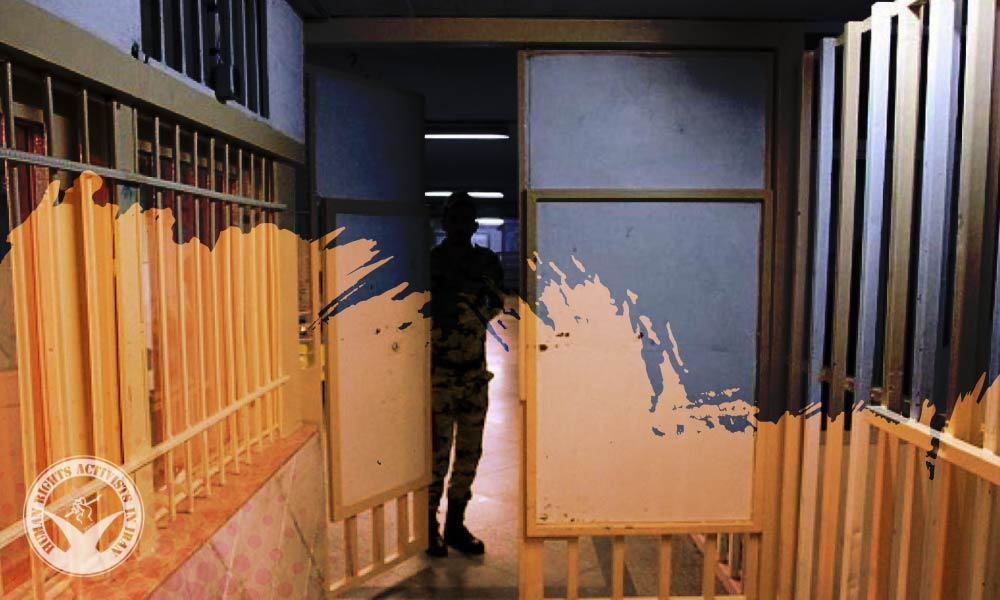 Two inmates were recently executed in Mashhad and Kerman Prisons.

According to HRANA, the news agency of Human Rights Activists, quoting Rasank News, in two separate cases, Emrahim Narooie and Heydar Gholjaie, both residents of Zahedan County, were executed in Mashhad and Kerman Prisons respectively. They had been sentenced to death on drug-related charges.

Reportedly, Heydar Gholjaie visited his family before his execution. In 2018, he was arrested at a checkpoint on the road connecting Bam City to Kerman for carrying drugs. Since then he had been jailed in Kerman Prison.

As the report points out, Iran’s judicial authorities have not publicly announced over 82% of executions. These unreported executions are dubbed as “secret executions” by human rights organizations.