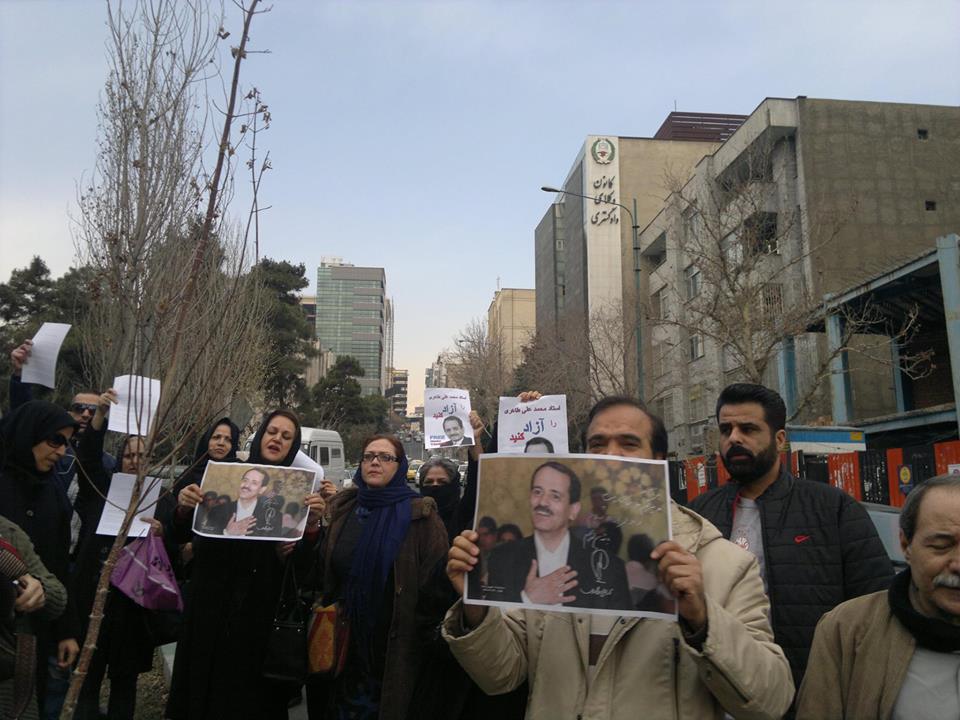 HRANA News Agency – On Tuesday 27 January, several followers of Erfane Halgheh and Tehrani Citizens attempted to form a gathering in Esfandiar Street – in front of the Human Rights Council of Judiciary – to show their concerns about Mohammad Ali Taheri and lack of information about his situation. However, they were confronted by police and security forces.

According to the report of Human Rights Activists News Agency (HRANA), on Tuesday 27 January, several Therani citizens and Efrane Halghe followers attempted to gather in support of “Mohammad Ali Taheri” the founder of Interuniversalism Mysticism in front of the Human Rights Council of Judiciary located in Esfandiar Street but they were confronted by police and security forces.

One of the protestors told HRANA reporter: “this gathering was about to form as tens of Erafen Halghe followers tried to attend but security forces intervened and attacked the protestors. Officers swear, throw punches and kicks and physically attacked the protestors on several occasions and forced them out of the main street – even those who attempted to gather groups of 4 to 5 people- to prevent any form of protests.”

This well informed source also added: “Peyman Mirzaie was forced into a vehicle after he was beaten close to the Human Right Council building and was transported into an unknown location.  However, in spite of all attempts made by the police and security forces to stop the gathering including swearing at women, a small group of protestors managed to get together in Vali-e-Asr Street. After this, people moved toward the Bar Association and formed a gathering demanding the clarification on Mohammad Ali Taheri situation.”

According to the reports , at the end of this gathering in front of Bar Association a statement was made by those attended in which they have expressed their concerns on the uncertainty with the Mohammad Ali Taheri’s health condition and demanded to ease the pressure on him as well as his unconditional release . In this statement, protestors complained about the damages made to Interuniversalism Mysticism on media and demanded that authorities stop calling this mysticism a “sect”.

It is important to mention that according to weblogs close to Sepah Intelligence Services a new 6-year-sentence has been given to Mohammad Ali Taheri. Back in 2011, Islamic Revolutionary Court sentenced Mohammad Ali Taheri to 5 years imprisonment, a fine and 72 lashes on the charges of “touching female patients, blasphemy and intervention in medical science”. Mr Taheri has been in solitary confinement since 4 May 2011. In protest to the uncertainty about his case and his charges he has initiated a hunger strike a while ago. In spite all of this there is no news about his situation.