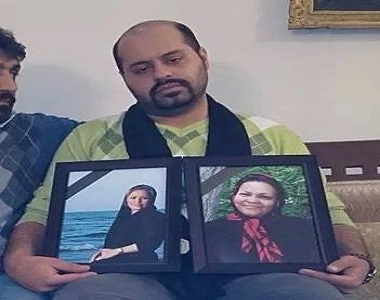 HRANA News Agency – Following the disagreement of judicial and security institutions with the possibility of the furlough of Peyman (Amirreza) Arefi, political prisoner in Rajai Shahr prison, he is in a bad mental mood.
According to the report of Human Rights Activists News Agency in Iran (HRANA), the lack of furlough due to the death of his mother and wife that occurred earlier, had made the conditions of prison very difficult for this political prisoner.
A close source to him said to HRANA’s reporter,”the state of the Peyman is different with many of the prisoners and the possibility of meeting with their loved ones for the death of Payman Arefi’s mother and wife on the path to meet him, has been very heavy and painful for him.”
It is worth mentioning that the parole request for this political prisoner held in Rajai Shahr prison, has been handed to the judicial and security authorities and he is waiting for a reply and the possibility of the parole to be released from the prison.
Peyman Arefi was transferred on Saturday, 28th November, from ward 7 of Evin prison to hall 12 of Rajai Shahr prison.
This political prisoner had been earlier exiled to Masjed Soleiman prison. “Nahid Rahmani” and “Ziba Sadeghzadeh”, his mother and wife lost their lives and on the way back from meeting him on 17th December 2013 in a car accident.
Peyman Arefi was arrested in May 2009 and on charges of sympathy with the “Monarchy Association” and was tried in the court and first sentenced to death and then on appeal, to 15 years imprisonment and exile.
This political prisoner was arrested along with his maternal cousin “Arash Rahmani”, who was executed in 2009, while had been arrested before the elections in 2009, in a group trial with after election detainees, he was tried by the court as an election protester, who sought carrying  out armed actions against the government.
Ziba Sadeghzadeh, who had been arrested along with Peyman Arefi, also was in ward 209 of Evin prison, under interrogation for some time. Peyman Arefi wrote earlier in a letter from prison that he confessed against himself to free his wife.