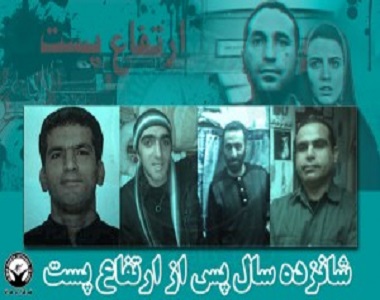 HRANA News Agency – Pourmansouri family were part of a group of 18 who were incidentally involved in hijacking an airplane without prior notice, the goal of which was simply getting rid of poverty, unemployment and economic problems after the Iran-Iraq war. After 16 years, these families still face the consequences and some of their children are still in prison including “Shahram Pourmansouri”, who was 16 years old at that time.
The story of this event has been filmed by Ebrahim Hatami Kia in a movie with the name of “Ertefae Past”. This report explains the suffering of these families after 16 years.
According to the report of Human Rights Activists News Agency in Iran (HRANA), one of the Ahwaz to Bandar Abbas flights was hijacked on November 13, 2000. The hijackers were 18 people including 4 women and 14 men who were relatives and without any notice at the very beginning of the hijacking on the proposal of “Khalid Hardani”, family’s son in law, they went to this dangerous path.
Farhang and Shahram Pourmansouri, two sons of the family, Khaled Hardani, son in law, his brother Rasoul and Neda, the family’s daughter and Khaled’s wife, also the family’s mother were in the center of this unsuccessful hijacking.
These people were tried by Branch 20 of Tehran’s Revolutionary Court and Khalid Hardani and Pourmansouri brothers were sentenced to death and others to long term imprisonments.
The execution sentences were upheld by Branch 31 of the Supreme Court and after many ups and downs and even rumors about the execution of Khaled Hardani, and after Neda Pourmansouri had a meeting with Hashemi Shahroodi, head of the Judiciary at the time, these death sentences were pardoned and were commuted to life imprisonment.
Shahram, the youngest son of the family who was 17 years old in that time describes his life as: “All my life is summed up in one line: The war started when I was a kid. Then, before I knew myself, I was sent to prison and now it is 16 years that I am in prison.”
Shahram Pourmansouri has been on hunger strike in the recent weeks to protest against the authorities’ failure in investigating and considering his case despite their promises and after being transferred to the hospital, he was returned to Rajai Shahr prison, in Karaj, without any medical service.
Farhang Pourmansouri, his elder brother, who was 18 at the time of his arrest has sewn his lips several times and even plaster cast his head to go on hunger strike and show his protest.
The mother of this family, who has also endured one and a half year imprisonment, including 45 days of solitary confinement, since then has been suffering from diabetes and herniated disc and even after being released, and in previous years, her disease has progressed because of her concerns for her children and she should have a lumbar disc surgery.
She also has been repeatedly interrogated and threatened because of her interviews with the media regarding the situation of her children.
Neda Pourmansouri, their daughter, suffers from depression and has been suffering from mental distress for many years. The second son of Khaled, who was not born at the time, has become 15 years old.
According to the relatives, the father of Pourmansouri family, who is a 70-year-old retired teacher gets no answer from the prosecutor each time that he goes to track his children case.
Six months ago the prison authorities promised Farhang and Shahram Pourmansouri to release them soon, but they are still held in prison and suffering from physical and psychological problems while the family’s suffering continues.