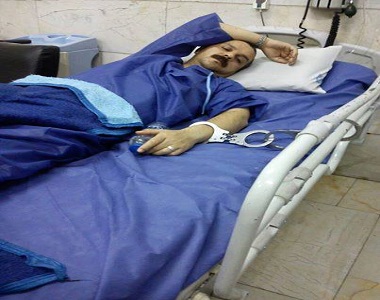 According to the report of Human Rights Activists News Agency (HRANA), Reza Shahabi Zakaria, labor activist and political prisoner, was transferred from Evin prison ward 350 to Rajai Shahr prison on Sunday, 1st July. He went on hunger strike on the same day to protest at the transfer.

He was transported to Imam Khomeini Hospital (One Thousands Bed Hospital) on Saturday morning, 12th July, from Rajai Shahr prison in Karaj, but he has refused to end his strike so far.

He is demanding officials’ accountability for his exile to Rajai Shahr prison, while he was handcuffed to a hospital bed, until yesterday.

Reza Shahabi’s family has got visit permission during last two days and they said his general condition is deteriorated.

This political prisoner who suffers from neck and lower back spine problems, should get immediate surgery but doctors say he needs to end his hunger strike and get some treatment for a period of time and then we can carry out the operation.

An informed source told HRANA’s reporter: “recently, persecution sends those patients to hospital who insist on sending them to hospital, but they do not let them get right treatment. In fact, they keep prisoners in kind of solitary confinement in hospitals.”

Reza Shahabi, board member of the Syndicate of Tehran and Suburbs Bus Company, is sentenced to endure 4 years Imprisonment, 5 years ban on Tread Union activities and 7 million Rail’s fine.