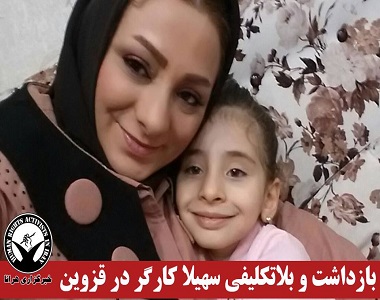 HRANA News Agency – Sources close to the Soheila Kargar, citizen of Qazvin, reported that she was arrested. On May 15, 2016 Ms. Kargar was arrested at her home by the security forces violently. She has been able to contact his family from prison only once so far. Also the reason for her detention is not known.

According to the report of Human Rights Activists News Agency in Iran (HRANA), on May 15, 2016 Soheila Kargar was arrested at her home by the security forces violently.

A source close to the Kargar family confirmed the news and in an interview with the reporter of HRANA said: “At 10 am on Sunday, May 15, 2016 security officers who had introduced themselves as    electrical officers, entered to Soheila Kargar’s house and arrested her violently without presenting any warrant. The level of violence was so that when she was on the ground, the male officer put his foot on her neck, and handcuffed her. Even a neighbor saw officers who climbed the wall and informed Ms. Kargar’s husband.”

The source pointed out: “by reference and follow-up by her family, they realized that the responsible for the case is judge Baghdadi at Branch 3 of Court of Qazvin. Apparently Ms. Kargar who bruises of officers’ violence was found on her face, complained the officers at the branch. After four days of ignorance and by the insistence of her family, Mr. Baghdadi announced them that she was transferred to Evin prison at the night of arrest. However, there is no information about the charges and the case is in Evin prison yet and she is under investigations.”

He also added: “In the evening of that day, apparently by the order of the judge Ms. Kargar called her family and said that she was all right and the interrogators had dealt with her respectfully and she was held in solitary confinement.”

A source close to the Kargar family told about her activities: “She was a candidate for parliamentary elections so she did not have activities outside the framework of the laws of the Islamic Republic. The focus of her activities on the ethnic rights and women’s rights. While she was refused approval, however she had objected to this disqualification legally and there was no reason to arrest her.”

At the end, the source said: “After the contact there is still no news or meeting and Kargar family are trying to make an appointment. She has a 5-year-old girl who is very dependent on her mother. They were lucky that the child was at her grandfather’s house when she was arrested and they have not been able to explain her mother’s arrest to her yet.”