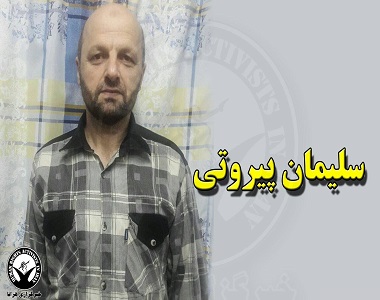 According to the report of Human Rights Activists News Agency in Iran (HRANA), while Suleiman Pirooti’s medical condition has been serious since a long time ago, the prison authorities did not take any action in this regard.

Mr. Pirooti has felt severe pain in his kidneys since 7 months ago and has repeatedly referred to the prison’s clinic to find out the cause of his pain and right treatment, but he has always been ignored by the authorities.

After a long time, about two weeks ago, he was sent to the hospital and after some tests he was told that he had been diagnosed with prostate cancer, and this pain was caused by the prostate for several months in the kidneys.

As mentioned, Suleiman Pirooti suffers from several diseases including high blood pressure, lumbar disc disease, sciatica, gastrointestinal discomfort, and has had stroke for twice, but in both strokes he was urgently transferred to a hospital out of the prison. After the second stroke, the left side of the body of this prisoner is completely disabled.

It should be recalled that even on November 20, this prisoner was sent to Raja’i Shahr Hospital in Karaj, due to a second heart attack. Officers, who were responsible for transferring the prisoner, in an illegal and immoral act, introduced this prisoner who was locked up with a bracelet to the hospital bed, and also was in a state of weakness as a “Nasty ISIS”, to people in the hospital. He was introduced to the people as “dirty Da’ish”. The officers let the provoked people hurt this prisoner, by opening the room door. It has been reported that some of the people spat on this prisoner, and some hurt him.

It should be noted that Suleiman Pirooti has spent more than 3 and a half years of his 5 years imprisonment sentence.

The Sunni prisoner of conscience has been accused of accusations such as gathering and conspiracy, while he believes that he was solely engaged in religious propaganda activities within the framework of the law and his religious beliefs.