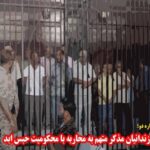 HRANA News Agency – Prisoners who have been charged with Muharebeh according to the old Penal Code, would find the chance of a retrial, after the changes and may receive reduction in their sentences or be released. Currently there are tens of prisoners who have been sentenced to life-time prison on charge of Muharebeh, at least 26 of whom are the men. The following list is the second list of prisoners with the charge of Muharebeh.

According to the report of Human Rights Activists News Agency (HRANA), at least 26 male prisoners are sentenced to life-time prison on charge of Muharebeh in different prisons around the country. Due to the changes in the Islamic Penal Code in 2013, these prisoners may request for a retrial. Some might receive reduction in their sentences and some others who have served many years in prison may get released. END_OF_DOCUMENT_TOKEN_TO_BE_REPLACED