A report on Fatemeh (Mary) Mohammadi 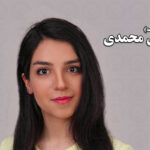