On Thursday, June 30, 2022, five protests took place in Iran. Read our review below for details, photos, and videos from these demonstrations:

In Ahvaz, a number of pensioners continued their protest in front of the Governor’s office. They chanted slogans against the government and called the president a liar. According to the protestors, the government is obliged to increase the pensions in compliance with the Supreme Labour Council’s enactment.

A number of farmers and tractor drivers parked their tractors and gathered before the Governor’s office in Gatvand city, Khuzestan Province, to protest against decreasing fuel rations.

In recent days, the personnel of Keshavarzi Bank gathered in front of the headquarter of this bank as well as a chapel inside the building to protest against their poor living conditions. 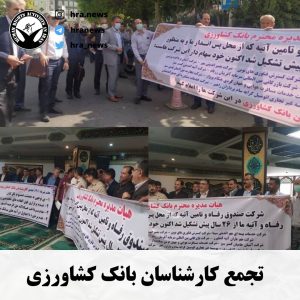 A number of the medical staff of the Allameh Karami Hospital in Ahvaz held a protest to ask for their unpaid wages and benefits.

The citizens who lost their money in the cryptocurrency exchange Cryptoland gathered in front of the Public and Revolutionary Court in Tehran to ask for the return of their money. Reportedly, their deposits in the form of cryptocurrencies have been frozen.