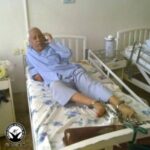 Scattered reports of demonstrations in Tehran and several large cities on the first day of the Persian month Esfand.

Despite the presence of tens of thousands of police and security officers in high-traffic areas and main squares of Tehran protests scattered across this great city was held.

HRANA reporters, according to news organization Human Rights Activists in Iran, and critics looking for protesters to call for government policy to hold a demonstration on Sunday, holding the first Persian month Esfand suitable memorial to the victims streets of Tehran on February 25 and other cities , Esfehan, Shiraz, Rasht, Bokan, Marivan, Tabriz,Mashad, Sanandaj ,witnessed the presence of several other Iranian cities High numbers of security forces dispersed demonstrations in some cities has been