A Daily Overview of Human Rights Violations in Iran for January 15, 2019

A Daily Overview of Human Rights Violations in Iran for January 10, 2019

The following is an overview of human rights violations in Iran on January 10th, 2019 based on the information compiled and verified by Human Rights Activists News Agency (HRANA).

(1) More than five protests organized across the country. The educators and teachers in the cities of Kermanshah and Ardabil, the customers of SAIPA, Iran Khodro, and Bahman Motor in Tehran, the shareholders of Padideh Shandiz financial institution, and clients of Ayandeh bank in Dezful have been held separate protests to request their demands.

(2) A prisoner was publicly executed in Kazerun on January 10, 2019. He was charged with sodomy by coercion and kidnapping of two 15-year-old. In 2018, at least 236 people were executed, and 195 people were sentenced to death in Iran.

(3) Fouad Salemi was arrested on unknown charges by the security forces in Ahvaz. His whereabouts is still unknown. Moreover, He have been arrested during Ahvaz protests and was released on bail.

(4) Expulsion of Badi Safajou, a Baha’i Chemical Engineering student, from Islamic Azad University of Tehran due to his faith. Bahai students in Iran routinely experience denial of entrance to university or expulsion during their studies.

(5) A political prisoner, Seyed Mohammad Mohammadi, who completed a 15-months prison term for blogging, was accused of ‘insulting the Supreme Leader’ and ‘Propaganda against the state’.

(6) Leila Mir-Ghaffari court was in session for de-veiling. In October she was sentenced to two-year in prison, for having pointed to a picture on the wall. Mir-Ghaffari was initially detained for supporting the “Girls of Enghelab Street.”

(7) An Azerbaijani Turkic minority rights activist, Sajjad Monadi, was sentenced to one-year imprisonment on the charge of ‘propaganda against the state’.

(8) A prisoner was spared from hanging on gallows by consent of next of kin in Hamadan while Farhad Younesi who was accused of murdering Adel Rahimi three years ago was saved from execution.

(9) Two construction workers, died in their workplace in Shokoufeh square in Tehran because of negligence in the oversight of safety conditions.

Three prisoners have been hanged in public in Karaj 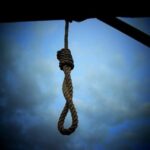 HRANA News Agency – Three prisoners have been hanged on charge of rape in 3 different places in Karaj yesterday morning.

The Karaj prosecutor said to the journalists: “These 3 had been arrested after several complaints and confessed to 14 robberies, 2 kidnappings and 2 rapes.” END_OF_DOCUMENT_TOKEN_TO_BE_REPLACED