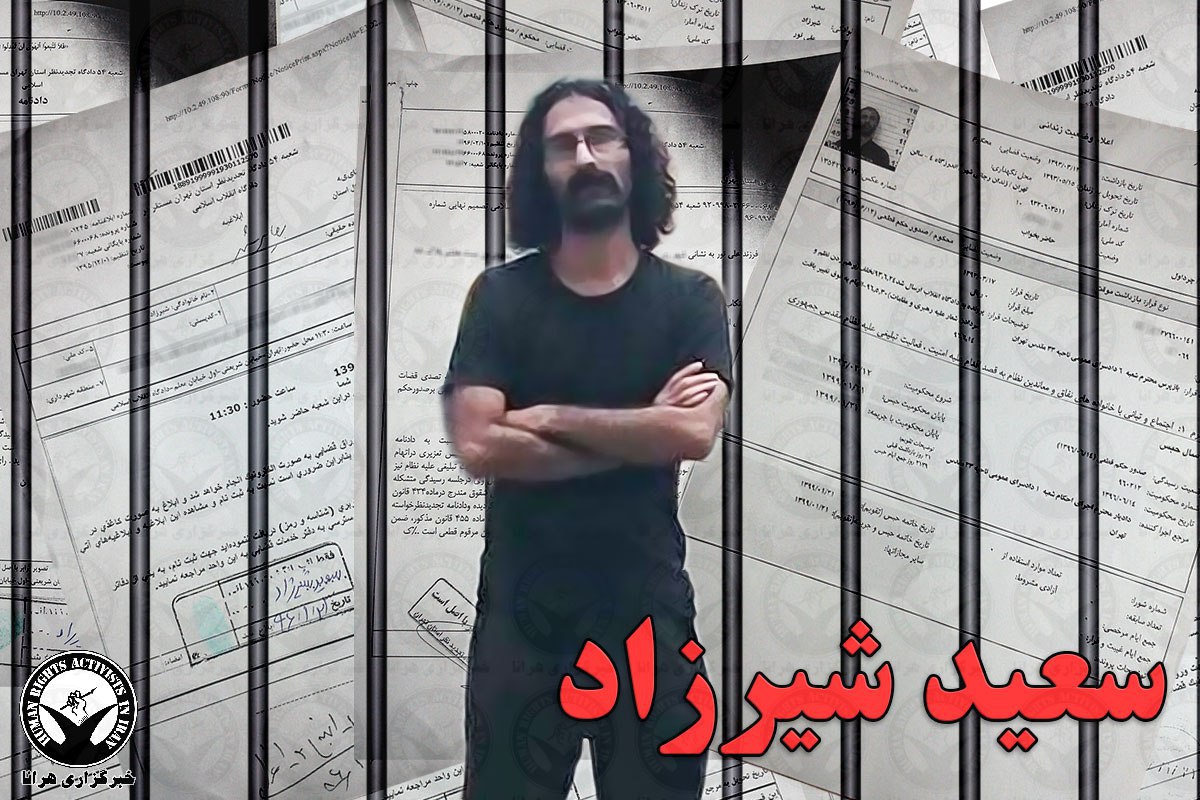 His most recent convictions stem from a prison protest that broke out last August among a group of wardmates, including Shirzad, who protested their transfer to an enhanced-security ward under the jurisdiction of Iran’s security establishment. For Shirzad and his fellow prisoners Amir Ghaziani, Saeed Pourheidar, and Ebrahim Firoozi, the protests incurred charges of “destruction of prison property,” ruled in January of 2018 in in Tehran province’s Criminal Court No. 2, Branch 116.

Rather than add prison time for the latter charge, Branch 3 of the Evin Prison Prosecutor’s Office set them a bail of 700 million IRR (approximately $7,000 USD).

In April of that same year authorities gave Shirzad more grief for the protests, issuing him an additional six-month prison term in the same court for “disturbing prison order.”

The “disturbing public order” sentence, along with the enactment of a one-year suspended sentence pursuant to a 2012 arrest, will compound Shirzad’s current five-year sentence by an additional year, slating his release for 2020.

According to HRANA reports, Shirzad’s five-year sentence was ruled on charges of “assembling and colluding against national security,” in connection to civic activities including visits to the families of political prisoners. [Though he began serving this sentence four years ago, it was not finalized until 2017].

Since his arrest in the Tabriz refinery where he worked on June 2nd, 2014, Shirzad’s prison time has been fraught with both oppression and physical pain. On July 11th, 2018, HRANA reported on prison authorities’ refusal to comply with medical orders for more specialized treatment of Shirzad’s lumbar disc disease and spastic lower back inflammation. As authorities continued to reject his requests for the recommended medical transfer — even out of Shirzad’s own pocket — his condition has deteriorated, and he now relies on a walker. HRANA also covered Shirzad’s gestures of protest against his condition and treatment in the system, including hunger strike and sewing his mouth shut.

Due to multiple postponements of his court date, he was also subject to a judicial lag of 15 months between his June 2014 arrest and September 2015 trial in Tehran Revolutionary Court Branch 15, presided by Judge Salavati. During that period he was detained without a conviction first in Evin, and then in Rajai Shahr Prison.

On April 15th, 2017 — a year and half after his already-delayed initial trial — his appeals session convened in Branch 54 of Tehran Appeals Court and ultimately ruled to uphold his 5-year prison sentence.

Shirzad’s rap sheet with authorities dates back to August 21, 2012, when he was arrested and given his one-year suspended sentence for assisting earthquake victims in Ahar, East Azerbaijan province, where he was reportedly involved in the operations of Sarand-based rescue camps. Though he was released on bail 19 days later, his more recent offenses — viewed as a kind of parole violation in the judicial system — kicked the suspended sentence into effect.

Rajai Shahr Prison, where Shirzad is currently held, is located in the northwestern Tehran suburb of Karaj.

HRANA News Agency – Rajai Shahr prison in Karaj where in recent months has been the scene of the crisis caused by the pressures on the political prisoners and their mass strike, despite the passage of time, continues to face other challenges, such as lack of proper nutritional and medical treatment.
According to the report of Human Rights Activists News Agency in Iran (HRANA), almost 53 political prisoners at Rajai Shahr prison in Karaj have been transferred to new and security hall in July. There are the deprivations which have been imposed on prisoners in this hall where even the toilets are equipped with CCTV cameras. END_OF_DOCUMENT_TOKEN_TO_BE_REPLACED

HRANA News Agency – An estimated number of 50 Political prisoners in Rajai Shahr prison in Karaj have been transferred to a new security ward. In this ward, where even bathrooms are equipped with CCTV cameras, there are more limits for prisoners. This new situation has prompted political prisoners to protest. 12 prisoners have gone on hunger strike and 6 inmates are in solitary confinement. Tensions in this ward continue.
According to the report of Human Rights Activists News Agency in Iran (HRANA), with the presence of a large number of prison guards, and without prior notice, about 50 political prisoners in Hall 12 of Rajai Shahr prison in Karaj were transferred to a place which has been built from a long time ago by the security forces. This site is equipped with a large number of surveillance cameras and surveillance devices, as well as shields that separate it from the rest of the prison. Political prisoners have been protesting at this place since their transfer, on July 30. END_OF_DOCUMENT_TOKEN_TO_BE_REPLACED