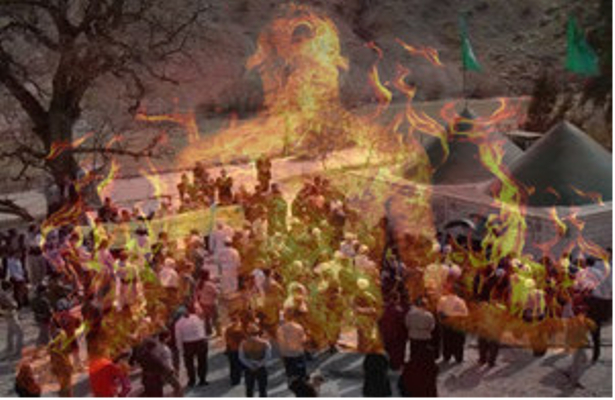 HRANA News Agency – Two followers of Ahl-e Haqq in Kurdistan set themselves on fire in protest to the persecution of another member of this group.  Ahl-e Haqq is a religious minority whose members are mostly ethnic Kurds.

According to a report by Human Rights Activists News Agency (HRANA), on June 4, 2013, Hassan Razavi set himself on fire in front of the main administrative office in the city of Hamadan.  Razavi’s self-immolation was in protest to how Keyumars Tamnak was being treated by officials in Hamadan Prison.  Tamnak had been forced to shave off his facial hair which is revered by the followers of Ahl-e Haqq.
With severe burning to more than 60 percent of his body, Razavi was taken to a hospital in Tehran.  He is under police watch at the hospital, and no one including his family is allowed to see him.
On June 5, 2013, another member of Ahl-e Haqq, Nimkard Tahari, set himself on fire in front of the same building after hearing that five prison officials had held Tamnak down to shave off his mustache.  Tahari died en route to the hospital, and his body was buried in the city of Sahneh on Thursday, June 6, 2013 under increased security measures.
The news of neither self-immolation has been covered by the local or national media.  Leaders of Ahl-e Haqq have been summoned to the Intelligence Agency in the city of Sahneh and have been threatened.
During the funeral held for Tahari, protestors staged a sit-in for two hours in front of the main administrative office, but none of the officials agreed to meet with them.  Eventually, the police forced the protestors to disperse.  Other members of Ahl-e Haqq have threatened to set themselves on fire if officials fail to address their concerns.