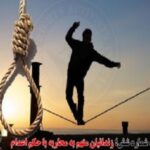 According to the report of the Human Rights Activists News Agency in Iran (HRANA), there are at least twenty four male death row prisoners who have been charged with Muharebeh, in different ways, are being held in Iran prisons. These prisoners can apply for a judicial review, due to the changes in the Islamic Penal Code in 2013. END_OF_DOCUMENT_TOKEN_TO_BE_REPLACED

According to the report of Human Rights Activists News Agency (HRANA), more than 70 Sunni prisoners are kept in Rajaei Shahr prison with security and political allegations and have received their sentences under sacrilege charge. These prisoners are usually residents of western parts of Iran and are kept kilometers far from their hometown. END_OF_DOCUMENT_TOKEN_TO_BE_REPLACED

According to HRANA’s sources, Human Rights Activists News Agency in Iran, the hall 21 of ward seven in Rajai Shahr prison has no basic facilities, proper and adequate lighting and heating and despite the cold weather, its windows are open with no glass. END_OF_DOCUMENT_TOKEN_TO_BE_REPLACED

HRANA News Agency – On Sunday, June 26, 2011, three Kurdish political prisoners entered their 24th day of hunger strike in Rajai-Shahr Prison.However, prison officials refuse to pay any attention to these prisoners’ demands and have failed to take the necessary steps to meet their needs to end this hunger strike.

According to a report by Kaleme News, three Kurdish political prisoner, Anvar Khezri, Kamran Shakhi and Seyed Ebrahim Seyedi, in protest to being locked up amongst ordinary criminals such as rapists, murderers and drug traffickers have been on hunger strike for 24 days.Meanwhile, prison officials remain indifferent towards these Kurdish activists and refuse to transfer them to the political prisoners’ cell block.

Ramzan Ahmadkamal, Davood Abdullahi and Ramzan Saeedi are three other Kurdish political prisoners that are currently locked up amongst inmates convicted of violent crimes and also prisoners with dangerous communicable diseases.According to the principles governing the separation of prisoners based on their crimes, these three individuals must also be kept in the cell block allocated to inmates arrested for political reasons.

Anvar Khezri, Kamran Shakhi and Seyed Ebrahim Seyedi have demanded to be transferred to the political prisoners’ ward in Rajai-Shahr Prison.Otherwise, they will continue their hunger strike indefinitely.