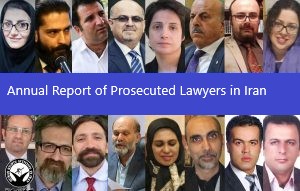 This report focuses on analyzing the situation of the lawyers who accepted cases with political, faith, or security chargers. These lawyers are in prison or are temporarily released on bail waiting for their trial.

On June 1, 2019, Amir Salar Davoudi, lawyer and civil rights activist, was sentenced to 111 lashes and 30 years in prison of which the highest penalty is 15 years imprisonment for the charge of “establishing a channel in the Telegram app”. Davoudi has been detained since November 2018 on the charges of “insulting officials”, “propaganda against the state”, “cooperating with enemy states through interviewing with Voice of America (VOA) television channel”, and “forming a group to overthrow the state”. He has been sentenced at the Branch 15 of the Revolutionary Court to 30 years in prison for several charges which according to the Article 134 of Iran’s Islamic Penal Code, he should serve the sentence for the charge with the highest penalty which is 15 years in prison on the charge of “establishing a channel in the Telegram group app”. He has decided not to appeal this sentence.

Davoudi who has been retained as counsel by several detainees held on politically motivated charges in Iran was arrested by security agents in his office on November 20, 2018. The security agents also searched Davoudi’s home and office and took away some of his personal belongings. He had been taken in for questioning on previous occasions and had been warned not to inform the public about his clients’ politically sensitive cases. The second session of his trial was held on May 4, 2018 at the Branch 15 of the Revolutionary Court.

Nasrin Sotoudeh, human rights lawyer, was arrested on June 13, 2018 in her house. The Branch 38 of the Revolutionary Court sentenced Sotoodeh to a five-year prison term and then the verdict was transferred to the Branch 36 of the Tehran’s appeals court. She is imprisoned in the Women Ward of Evin prison being accused for seven charges for her second case and is sentenced to 33 years and six months in prison and 148 lashes though only 12 years of this verdict is executable.

Mohammad Najafi, attorney and human rights activist was sentenced to 19 years imprisonments. He is serving his three years sentence in prison and faced 74 lashes and 16 more years imprisonment in January 2019 for his new charge of “spreading falsehood and disturbing public opinion”, “insulting the Supreme Leader”, “propaganda against the state”, “cooperating with enemy states through interviewing with Voice of America (VOA) television channel”.

On October 28, 2018, Najafi was arrested and transferred to Arak Prison to serve his sentences. He was previously detained along with 10 others for participating in the January protests in Shazand County. Judge Mohammad Reza Abdollahi of Arak Criminal Court No. 2, the Branch 102 sentenced Najafi to three years in prison and 74 lashes for “publishing lies with intent to disrupt the public opinion” and “disturbing the public peace.” The sentences were upheld in the Branch one of Markazi province Appeals Court.

Najafi got wind of his new “publishing lies” accusation via a writ he received on October 13th from the Branch 1 of Shazand Investigation and Prosecutions office, where he was interrogated and ultimately charged for it. He has additional charges pending investigation in the Revolutionary Court of Arak.

Najafi was previously detained for inquiring into the death of Vahid Heydari, who died in Police Detention Center amid the January protests. Najafi challenged Iranian judicial authorities who had claimed Heydari was a drug dealer that committed suicide while in custody. Najafi’s interviews with Heydari’s loved ones suggest that Heydari was a street peddler with no criminal record, whose autopsy report showed none of the typical markers of suicide but did indicate head injuries consistent with blunt-force trauma.

On January 2, 2019, Farhad Mohammadi, a Kurdish human rights lawyer and secretary of the National Unity Party in Kurdistan, was arrested in Sanandaj, Kurdistan Province by security agents. The reasons for his arrest, his place of detention, and the charges pending against him are not yet known. He is also an environmental activist. His arrest warrant was extended on February 3, 2019.

Mostafa Daneshjou, the detained lawyer of the Gonabadi Dervishes, was sentenced to eight years in prison on December 16, 2018 on charges of “membership in the Dervish cult,” “acting against national security,” “propaganda against the state,” and “disturbing the public opinion”.

Seven armed agents arrested Daneshjoo in his mother’s home on July 7, 2019, taking him to solitary confinement in Evin Prison’s Ward 209 where he was detained for 45 days. He was then sent to Ward 4, typically designated for convicts of financial crimes. He was arrested pursuant to a case filed against him in 2017 in Tehran’s Security Investigation Court, in connection to a violent clash that took place February 2018 near the Dervish spiritual leader’s residence in Golestan Avenue in Tehran.

He was denied medical care for his severe heart disease in January 2019.  Symptoms of Daneshjoo’s asthma were exacerbated by his stay in Evin Prison’s Ward 250 between 2011 and 2015. Despite orders from the assistant prosecutor to send Daneshjoo to a healthcare facility, Evin Prison authorities have barred his transfer.

Mostafa Tork Hamedani, is an attorney who has been sentenced to six months imprisonment in Iran for allegedly slandering a former prosecutor on January 15. 2019. The preliminary sentence against him was 10 months in prison and 40 lashes but on January 15, 2019 his sentence was reduced to four months with the flogging sentence suspended for one year. He was released on January 21, 2019, in the process of pardoning prisoners with less than a year sentence.

Hamedani was prosecuted based on a lawsuit brought by former Tehran Prosecutor Saeed Mortazavi, who accused Hamedani had made public accusations against him before Mortazavi was convicted in a financial case regarding corruption during the period Mortazavi headed the Iran’s Social Security Organization (SSO) between 2011to 2013.

Attorneys, Arash Keykhosravi and Ghasem Sholeh Saadi, were arrested along several other lawyers and civil rights activists who gathered in front of the Iranian Parliament building to protest both the Caspian Sea Agreement and the Guardian Council’s vetting process on August 18, 2018. They were transferred to the Great Tehran Penitentiary after being charged at the Branch five of the Evin Prosecutor’s Office. Keykhosravi and Sholeh Saadi were released on bail on December 11 and December 4, 2018 respectively. They were sentenced to six years jail time on December 10, 2018 on the charges of “propaganda against the state” and “assembly and collusion against national security”. Their appeal request was sent to the Branch 34 Tehran appeals court.

Notably, Ghasem Shole-Saadi previously served two terms in the Islamic Consultative Assembly and was convicted of “insulting the Supreme Leader” via a letter he notoriously published in 2002. He has been imprisoned several times on charges from the Revolutionary Court for “propaganda against the state”.

Keykhosravi has represented several high-profile human rights cases throughout his career, including the suspicious death of environmentalist Kavous Seyed-Emami in Tehran’s Evin Prison in February 2018.

Masoud Shamsnejad, lawyer and professor, was arrested on January 8, 2019 and transferred to the Ward 3-4 of Urmia Prison on January 17, 2019. The security guards raided his home and confiscated his belongings at the time of his arrest. He was sentenced to six years imprisonment by The Branch three of Urmia Revolutionary Court on February 10, 2019 on the charges of “propaganda against the state” and “membership in an opposition group”. He was under pressure for the cases he accepted to defend. After he requested for appeal, he was released on one billion Tomans bail on February 17, 2019.

Zeinab Taheri, is a lawyer who was charged with “publishing lies with intent to disturb the public opinion” and “propaganda against the state,” in an indictment prepared by the Prosecutor’s Office for Culture and Media that referred her case to The Branch 26 of the Islamic Revolution Court in Tehran.

Taheri was summoned and arrested on June 19, 2018 and then was transferred to the Qarchack Prison. She was arrested a day after her client, Mohammad Reza Salas Babajani, a Sufi dervish was executed on June 18, 2018. Salaj Babajani was executed for allegedly driving a bus that killed three members of the security forces near the house of a Dervish spiritual leader on 19 February 2018.

Taheri was released on bail on August 8, 2018. She had cases such as Mohammad Reza Salas Babajani, Mohammad Ali Taheri, and Ahmad Jalali.

Lawyers, Payam Derafshan and Farokh Dorouzan were arrested on August 31,2018 and were released on bail on September 6, 2018. Derafshan was the lawyer of Mohammad Najafi and Kavous Seyed Emami. Forouzan was also a children’s rights activist.

Hoda Amid, attorney and women’s right activist, was arrested on September 1, 2018 by the security forces and was transferred to the Evin Prison. She was released on bail on November 4, 2018. It has been claimed that Hoda Amid and Najmeh Vahedi had held a workshop for women on “Marriage Article (conditions stipulated in marriage certificate)”.

Hossein Ahmadi Niaz, lawyer, was summoned to the Branch 106 of Criminal Court of Sanandaj on the charge of “publishing falsehood” and “disturbing public opinion” on January 15, 2019.

Last year, he was arrested after being referred to the Revolutionary Court of Sanandaj on August 05, 2018 and was released on bail after a few hours.

On February 8, 2019, Esmail Bakhshi’s lawyer, Farzaneh Zilabi, was summoned to the Branch three of the Revolutionary and Civil Court of the city of Shush to answer questions as a “knowledgeable person” about the case. She said on February 17, 2019 after going to court “I was summoned based on a report by the Justice Bureau’s Security Department and the summon was in connection with an interview during which the subject of Esmail Bakhshi’s torture was brought up. Considering the accusations in the report, such as “spreading falsehood” and “propaganda against the state”, I refused to answer questions that the report had directly addressed to me”. She explained that the case is ongoing, and, as Bakhshi’s lawyer, she was not able to divulge confidential information about her client to anyone. If she did, she would be both breaking the law and violating disciplinary codes of conduct. She added that she will stay Bakhshi’s lawyer.

Esmail Bakhshi, a labor activist, who spoke out about abuse and torture he suffered in detention.

Judge Salavati accused Mahmoud Alizadeh Tabatabaei with “spreading falsehood and disturbing public opinion” in the Branch 15 of Revolutionary Court of Tehran. Alizadeh Tabatabaei said on February 20, 2019 that this is following his complaint against Salavati in which Salavati had claimed that he never asked the accused in “Mola Tina” case to change their lawyer and I was spreading falsehood by saying that. 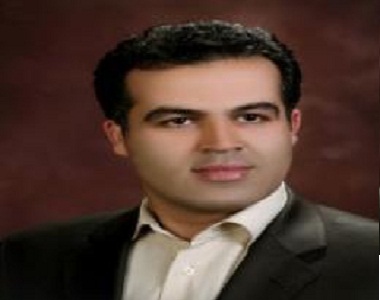 HRANA News Agency – Masoud shams Nejad, an attorney and on the faculty of Payam Nour and Azad universities in Orumieh, was arrested on Thursday May 9, 2013 and transferred to Orumieh prison after initial interrogation.
According to a report by Human Rights Activists News Agency (HRANA), shams Nejad is currently in Orumieh prison and since his transfer there all phone contacts from the ward he is incarcerated in have been cut off. As of to date reason for his arrest still unclear. END_OF_DOCUMENT_TOKEN_TO_BE_REPLACED