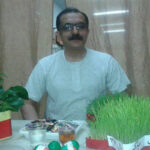 Human Rights Activist News Agency (HRANA) – Mohammad Ali (Pirouz) Mansouri, who has been a political prisoner at Rajai Shahr for eleven years, is further from freedom than he thought.

A new case file opened up against Mansouri, accusing him of “gathering and conspiring against the regime,” will prolong his 15-year prison sentence by another five years. Cited in court as evidence of this charge were records of his hunger strikes, instances of “aggravating other prisoners,” his declaration of support for Mohammad Ali Taheri, and a statement he issued condemning the execution of a Sunni prisoner.

In an effort to alert human rights defenders — particularly the UN’s Special Rapporteur on Human Rights in Iran — Mansouri has written an open letter detailing the circumstances of the new case file.

Full text of his letter below:

“Report of a Fabricated Casefile

I, Mohammad Ali Mansouri, have been serving a prison sentence since August 28, 2007 — i.e. for eleven years. In May of 2017, per a newly fabricated case file, I was imprisoned and interrogated in Ward 209 [Ministry of Intelligence jurisdiction] for a month. The new charge was built on my exchanges through [the messenger app] Telegram. Since I’ve been in prison, I haven’t been granted a single day of furlough. In the absence of any evidence, charges were dismissed, and the case was closed. Then, in October, I was interrogated once more, in connection to a new charge: propaganda against the regime. From behind bars.

In January, without any advance notice that would allow me to retain an attorney, I was tried by Judge Moghiseh in Branch 28 of the Tehran Revolutionary Court. I was indicted on charges that were never mentioned during my interrogations. The trial was unconventional[…]even compared to the unlawful methods employed routinely.

Defenseless and without the presence of an attorney, I was sentenced to five years of imprisonment for propaganda against the regime and gathering and conspiring with intent to commit a crime.

Notwithstanding the impossibility of gathering and conspiring from within the prison, criminal intent alone carries a five-year term […]

I verbally protested the matter (as they saw no need to put my complaint in writing). I introduced Mr. Dorafshan as my attorney, and yet, in his absence, the appeals court settled on a three-year imprisonment sentence[…]

The sentence was issued without a supervising judge, without me, and in the sole presence of the court secretary. The court record was entirely verbal. It was in no way compliant with the Islamic Penal Code. It was never clarified how it was deemed feasible when a hearing never convened, a judge never appeared, the defendant was absent, and the defense itself never spoke, that an appeal request could be filed and that this file could result in a sentence?

I write not for the people of my country, who know this story by their own flesh and bones, but for human rights organizations, especially the United Nations Special Rapporteur on Human Rights in Iran. May they see the real face of our so-called independent judiciary, which is nothing but a sentence-printing machine run by the Ministry of Intelligence.

Mohammad Ali (Pirouz) Mansouri was arrested September 2007 for participating in the 19th-anniversary commemorations of political prisoners that were executed in 1986. Branch 15 of Tehran Revolutionary Court, presided by Judge Salavati, sentenced him to 17 years of imprisonment on charges of “contacting and conspiring with the anti-regime Mujahedin-e Khalq Organization”. Added to that was an exile sentence to Karaj, in Rajai Shahr Prison, and a fine of 150 thousand tomans [approximately $80 USD]. The sentence was upheld in appeals court.

In July 2015, Mansouri’s daughter Iran Mansouri reported that a clemency program held on a religious holiday had reduced her father’s sentence by two years. His most recent case file has increased his remaining five-year term to a decade. He has yet to be granted furlough. 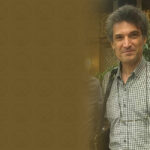 Human Rights Activist News Agency (HRANA)- Farhad Meysami, who was arrested and transferred to Ward 209 of Evin Prison on July 31, 2018, has been on hunger strike since August 1st. He faces charges of “Collusion and conspiracy to threaten national security”, “Disseminating propaganda against the regime,” and “Insulting the hijab, an essential sacrament of Islam” from Branch 7 of Evin Court.

“Farhad Meysami [declared his strike] when he contacted his mother, which was 20 days into his detention,” Mr Khandan said, explaining that news hadn’t spread earlier because Mr Meysami was being held in solitary confinement. In the same phone conversation, according to Mr Khandan, Mr Meysami said he was anticipating a transfer to the prison’s general ward in three days.

Reading from the interrogation sheet intended to elucidate his charges, Mr Meysami cited accusations of “provoking women to appear without hijab in the street”. Mr Khandan conjectures that Mr Meysami’s charges actually stem from his possession of pin-back buttons reading “I protest mandatory Hijab”.

“Farhad Meysami’s mother was extremely worried following the news of his hunger strike and intimated that she wanted to start a hunger strike as well,” Mr Khandan added. “But some friends and I dissuaded her, given her age and her need to take medications on a daily basis.”

Earlier, Arash Keikhosravi — who has been detained in the Great Tehran Penitentiary for the past four days — told HRANA that “on Sunday, August 12th, Mr Meysami’s mother and I went to Branch 7 of Evin court to follow up on his case and to see how he was doing. I planned to register as his lawyer, but the officials at the branch told me that section 48 of the Criminal Procedure Code bars me from doing so.”

Section 48 of the recently-amended Criminal Procedure Code states that those accused of national-security crimes must choose their lawyer from a list approved by the Iranian judiciary. Human Rights Organizations have argued that this new policy gives further license to infringe on the rights of defendants.

Mr Keikhosravi also said that “Mr Meysami’s mother went to see the case investigator after receiving a phone call in which she could hear the sounds of her son’s interrogation and torture.”

The investigator reportedly denied that the call had come from Evin authorities, promising her a phone call from her son to alleviate some of her worries and assure her of his wellbeing.