According to HRANA, the news agency of Human Rights Activists, the activists were beaten and arrested while marching in support of the people of Khuzestan.

Before their arrest, they had said in a video that a number of them had been beaten in front of the Interior Ministry by military forces. 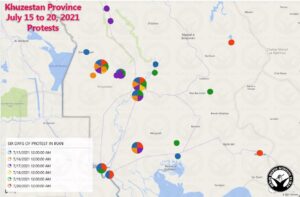 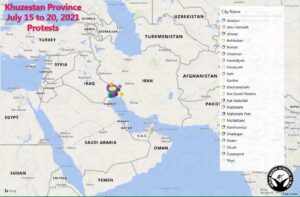 Several activists were arrested in Tehran following a rally in support of the citizens of Khuzestan amidst the ongoing protests over water shortages in the province.

The detention of these citizens was violent and accompanied by beatings. Earlier today, in a video, Narges Mohammadi stated, “We wanted to gather in front of the Ministry of Interior to protest the killing of innocent – thirsty people in Khuzestan, but we were treated violently by security forces and some of us were beaten. Now we are marching in a street in Tehran to support the people of Khuzestan.”

During the last six days, people in Khuzestan Province have been protesting the frequent water cuts and mismanagement of water sources in at least 20 cities.

Since the second day of the protests, provincial officials have confirmed that two citizens, 30-year-old Mostafa Naeemawi from Shadegan, and 17-year-old Ghasem Naseri (Khaziri) from the Kut Abdollah area of Ahvaz, were killed during the protests. HRANA has received reports, which have yet to be verified, of a third civilian additionally being shot dead by military forces.

The exact status of the detained activists and their whereabouts are unknown at the time of writing.