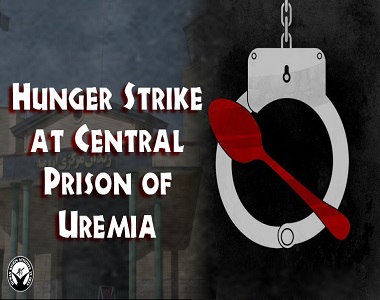 HRANA News Agency – Despite deteriorating health condition of at least 13 striking prisoners at Uremia Central Prison, these prisoners continue their hunger strike.
According to the report of Human Rights Activists News Agency in Iran (HRANA), out of 26 striking prisoners who are at 33rd day of their hunger strike, at least 13 are in critical health condition. According to the reports, on December 21st general health of two prisoners “Ali Ahmad Soleymani and Khazar Rasoulizadeh” have deteriorated and started seeing blood spots in their vomit. Although they have been sent to the prison clinic, they refused to be injected with fluids and returned to the general ward later. END_OF_DOCUMENT_TOKEN_TO_BE_REPLACED

HRANA News Agency – Twentieth day of hunger strike of 26 political prisoners detained in the central prison of Uremia (Darya) passed while the authorities regardless of the strikers’ demands were trying to convince them to break their strike.
According to the report of Human Rights Activists News Agency (HRANA), on Thursday 20th November, prisoners in ward 12 of central prison of Uremia to protest against the lack of “crime based wards’ separation” role and the problems with some primary facilities, have gone on unlimited hunger strike, but still their demands are denied. END_OF_DOCUMENT_TOKEN_TO_BE_REPLACED

HRANA News Agency – Authorities’ pressure to break the hunger strike of 28 political prisoners detained in the central prison of Uremia (Darya) has increased.
According to the report of Human Rights Activists News Agency (HRANA), on Saturday, 6th December, Intelligence Ministry representative summoned Osman Mostafapour, one of the prisoners in the prison of Uremia to the security office and asked him to stop hunger strike by disport from the strikers. END_OF_DOCUMENT_TOKEN_TO_BE_REPLACED