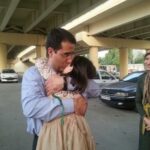 HRANA News Agency – Amin Chalaki, who was among the arrestees of tenth presidential election’s protesters, released after serving two years and six months in prison.

According to the report of Human Rights Activists News Agency (HRANA), Amin Chalaki, who was among the protestors that had been arrested after tenth presidential election, was released from ward 350 of Evin prison. He was sentenced to four years in prison by primary court, which was reduced to 2 years and a half by the appeal court. END_OF_DOCUMENT_TOKEN_TO_BE_REPLACED

Here is the list of these 206 prisoners prepared by the Human Rights Activists News Agency (HRANA): END_OF_DOCUMENT_TOKEN_TO_BE_REPLACED

HRANA News Agency – According to reports published by media outlets, Sattar Beheshti was arrested by the cyber police, a subsidiary of the nation’s security forces on October 30th 2012. On November 6th, Mr Beheshti’s family was reportedly informed of his passing, requesting that his body be collected at the Kahrizak morgue. All along, the family was threatened not to speak to anyone regarding this matter.

Give that Mr. Sattar Beheshti was at Evin’s general ward 350 from October 31st 2012 to November 1st 2012 and the detainees at this ward had therefore witnessed his painful physical and psychological condition first hand, we view it our national and religious duty to inform the honorable Iranian nation of Mr. Beheshti’s background and predicament.

Sattar Beheshti was charged as a result of his criticism of the authorities of the ruling establishment in his personal blog.  He told eye witnesses at Evin’s ward 350 that while in custody at the police headquarters, he had first been severely beaten while hanging from the ceiling and later beaten further while tied to a chair. Sometimes  he was beaten while his hands were tied and at other times he was pushed to the ground and kicked severely in the area of the head and neck by interrogators wearing army boots.  While being tortured, Beheshti was reportedly subjected to the most vulgar curses attacking his honor and his interrogators repeatedly threatened to kill him.

When arriving at Evin’s ward 350, evidence of torture was apparent throughout Sattar’s body and he was in a painful physical and psychological state. His face was scarred, his head was swollen, his wrists and arms were bruised and the effects of hanging from the ceiling were apparent on his wrists.  Bruises were also apparent on other parts of his body such as around his neck, his stomach and his back.

Despite the fact that he was barely able to write as a result of his beatings, Sattar nevertheless filed a short complaint to the authorities of Evin’s ward 350, describing his condition and the manner in which he had been treated at the hands of the security agents, demanding that they follow up on his case.

Given that his physical condition was far from normal, Sattar was taken to the prison infirmary on two occasions where the physician at the infirmary was also able to witness his condition first hand.

On November 1st, 2011, Sattar a young and true activist of the Green Movement was once again transferred from Evin’s ward 350 to the security police headquarters. He was extremely concerned when leaving the ward and told other detainees: “They intend to kill me.”  Four days after his transfer, his family was informed of his death.

Those who claim to be the followers of Imam Ali must be reminded of his response to the news of a Jewish women’s torture under his reign, her legs bruised, when he stated: ” If a victim dies, they are not to blame.”

We believe that if the criminals at Kahrizak prison and the torturers at Evin prison whose accounts of torture have been repeatedly published and are known to the authorities of the ruling establishment, would be punished rather than encouraged and promoted,  such heinous Kahrizak style tortures and cases of murder would no longer be repeated.

It has now been proven to all of us that when it comes to the current ruling establishment our cries will only fall on deaf ears.  While offering our condolences to the family of the late Sattar Beheshti and the oppressed Iranian nation, we remind everyone that the current ruling establishment, whether they like it or not, are responsible for the cruelty, torture and unjust bloodshed of innocent victims.