HRANA News Agency – Amir Doorbin Ghaziani, Samkoo Khelghati, Salar Setodeh, Omid Zareinejad and Mohammad Shojaei, 5 political and security prisoners in the quarantine of ward 7 of Evin prison were transferred to solitary confinements.
According to the report of Human Rights Activists News Agency in Iran (HRANA), following the protest, by some of political prisoners in the Quarantine of ward 7 in Evin prison, against one of the inmate’s behaviour, all of them were taken to solitary confinement. END_OF_DOCUMENT_TOKEN_TO_BE_REPLACED 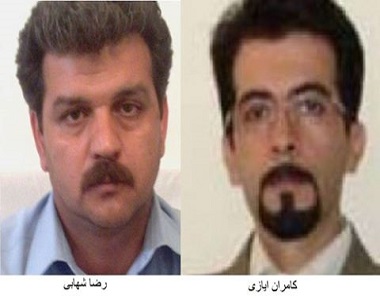 HRANA News Agency – Reza Shahabi, Kamran Ayazi and Omid Zareinejad, who were charged with propaganda against the regime, have been sentenced to accumulation of 18 months in prison following the events that are known as black Thursday.
According to the report of Human Rights Activists News Agency (HRANA), in a court session held on branch number 26 of revolutionary court for three beaten prisoners in “black Thursday” on Saturday March 7, Reza Shahabi was sentenced to one year and Kamran Ayazi and Omid Zaresi Alinejad sentenced to 91 days in prison. END_OF_DOCUMENT_TOKEN_TO_BE_REPLACED

HRANA News Agency – Reza Shahabi, Kamran Ayazi and Omid Zareinejad, were tried for charge of propaganda against the regime which was alleged to them after the events on 17th April (Guards’ riot to ward 350) at branch 26 of the Revolutionary Court.
According to the report of Human Rights Activists News Agency in Iran (HRANA), on 15th February, a trial was held for accusation of propaganda against the regime, against Reza Shahabi, Kamran Ayazi and Omid Zareinejad, at branch 26 of Revolutionary Court, presided by Judge Ahmadzadeh. END_OF_DOCUMENT_TOKEN_TO_BE_REPLACED

HRANA News Agency – There are more than 206 political prisoners in the 350 and women’s sections of the Evin prison. This includes both who have definite sentences and those who are under temporary arrest.
Although the section 350 is one of the public sections of the Evin prison, the prisoners there are prevented from their basic rights like telephone contact or meeting their families.
Here is the list of these 206 prisoners prepared by the Human Rights Activists News Agency (HRANA): END_OF_DOCUMENT_TOKEN_TO_BE_REPLACED