A Daily Overview of Human Rights Violations in Iran for December 26, 2018

The following is an overview of human rights violations in Iran on December 26th, 2018 based on the information compiled and verified by Human Rights Activists News Agency (HRANA).

(1) The forced closure of nine Baha’i-owned businesses in Omidiyeh which had shut their stores in honor of their religious holiday, are still going on after 23 days. According to the law, citizens may close their businesses for up to 15 days a year for no reason; however, this law is not applied to Baha’is.

(2) Five protests were organized on December 26, 2018. Members of the cooperative housing organization for employees of the Ministry of Agriculture-Jahad, workers of Damghan Agro-industry Company, families of arrested workers of National Steel Company of Ahvaz, workers of Mahabad municipality, and farmers in Isfahan expressed their demands in separate protests.

(3) Mohammad Hossein Sodagar, an Iranian Azerbaijani poet and journalist, was flogged 74 times in the city of Khoy. His charge was questioning Majid Moghaddam, a member of the city council about validity of his claimed degree.

(4) Two construction workers have been severely injured in Bushehr and Lorestan provinces because of unsafe labor practices.

(5) A woman was executed in Tehran. She was identified as Noushin, 25-years-old. She was accused of murdering a man, named Soheil, who repeatedly raped her and forced her into sex with his friends.

(6) The mayor of district 19 of Tehran has confirmed that more than 200 families still live in inactive old brick kilns in this area. These families do not have access to clean tap water, sewage, and natural gas for heating.

(8) The chairman of Cultural Heritage, Handicrafts and Tourism Organization of Iran confirmed that the historical monuments in Tehran continue to be demolished for unauthorized construction, such as Nasirodolleh House, Zahiroleslam House, and Yazdgerd House.

(9) A political prisoner, Nasrollah Lashani, was beaten and insulted in front of his wife and his 8-years-old son during a family visit. Lashani is accused of ‘propaganda against the state’ and sentenced to six years in prison.

(10) Houshmand Alipour and Mohammad Ostadghader who are detained on the charge of ‘membership in a Kurdish opposition group’ were transferred from Saghez prison to Sanandaj for their court session.

(11) Reportedly, 108 workers of Mahshahr Pipe Industrial Company and 100 workers of Kavosh Pressure Vessel Manufacturer have been laid off. In addition, 120 workers of Kishwood Industries have unpaid wages.

(12) Due to death of Hashemi Shahroudi, the Chairman of the Expediency Discernment Council, all concerts are cancelled on this Wednesday, Thursday, and Friday. Today was announced as a national day of mourning.

(13) Mohammad Zamanzadeh, a Telegram activist, returned back to the Evin prison after a few days of furlough. He was sentenced to 12 years imprisonment for blasphemy-related charges.

(14) Ahmad Hajebi, an authority in the Ministry of Health announced that The most suicides which result in death are among 15- to 29-year-olds. Moreover, there are 2 million and 800 thousand addicted to drugs.

(15) Saeed Shirzad, a political prisoner in Rajai-Shahr prison, has been refused urgent medical care despite doctors requested his transfer to hospital for his severe kidneys failure. While the prosecutor’s office has assured that he would receive treatment, prison authorities have prevented this transfer.

(16) A 39-years-old prisoner who was accused of murdering his father-in-law, was spared from the hangman’s noose by the forgiveness of the next of kin in Babol.

(17) Leili Khatami’s, a children’s rights activist, was arrested on November 10th in Zahedan and her family still are not informed of her place of detention. She was charged with ‘espionage’.

Nineteen people hanged during the last couple of days 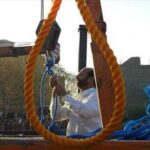 According to the report of Human Rights Activists News Agency (HRANA), five prisoners with unknown identity were hanged in Oroumieh prison. These individuals were charged with carrying drugs. END_OF_DOCUMENT_TOKEN_TO_BE_REPLACED