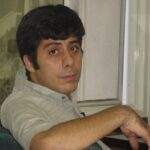 HRANA News Agency – Masoud Bastani, imprisoned journalist, went back to Rajai Shahr prison in Karaj, at the end of his leave, as it was not extended by the prosecutor’s office.

According to the report of Human Rights Activists News Agency in Iran (HRANA), this imprisoned journalist’s sentence of six years imprisonment has already ended and currently his absence because of being on leave has prevented him from being released. END_OF_DOCUMENT_TOKEN_TO_BE_REPLACED

According to a report by Kalame, Masoud Bastani, the political prisoner of Rajai Shahr prison has come to furlough but his wife, Mahsa Amrabadi is still in the Evin prison. END_OF_DOCUMENT_TOKEN_TO_BE_REPLACED

Here is the list of these 206 prisoners prepared by the Human Rights Activists News Agency (HRANA): END_OF_DOCUMENT_TOKEN_TO_BE_REPLACED

The Iranian authorities must protect all detainees and prisoners from harassment and degrading treatment, Amnesty International said today, after nine female political prisoners, including prisoners of conscience, started a hunger strike in response to alleged abuse by prison guards.