A Report about the Latest Status of Daneshpour Family in Prison 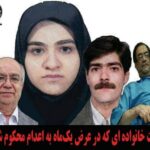 HRANA News Agency – Mohsen Daneshpour, Motahareh Bahrami (parents), Ahmad Daneshpour and Reyhaneh Haj Ebrahim Dabagh (son and daughter in law) along with Hadi Ghaemi were arrested on  December 28, 2009 as the security forces raided their houses and on  January 16, 2010 were tried and sentenced to death within a month by judge Salavati court without a lawyer.

According to the report of Human Rights Activists News Agency in Iran (HRANA), Ahmad Daneshpur Moghadam born in 1970 and his wife, Reyhaneh Haj Ebrahim Dabagh born in 1981 and his parents Mohsen Daneshpour Moghadam born in 1944 and Motahareh Bahrami born in 1954 with Hadi Ghaemi, their family friend were arrested on December 28, 2009. END_OF_DOCUMENT_TOKEN_TO_BE_REPLACED

Here is the list of these 206 prisoners prepared by the Human Rights Activists News Agency (HRANA): END_OF_DOCUMENT_TOKEN_TO_BE_REPLACED