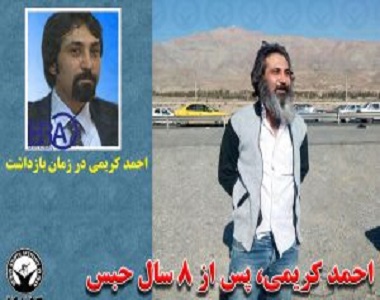 HRANA News Agency – Ahmad Karimi, political prisoner of Rajaei Shahr prison of Karaj, who is serving his sentence of 15 years since 8 years ago, came to furlough for the first time. Mr. Karimi who had been arrested before elections and during a fabricated trial was illustrated as one of the arrestees of post-election events, had received death sentence in the primary court.
According to the report of Human Rights Activists News Agency (HRANA), Ahmad Karimi was sent to a 4-day furlough after 8 years. END_OF_DOCUMENT_TOKEN_TO_BE_REPLACED

HRANA News Agency – More than 70 political prisoners are kept in Rajaei Shahr and Evin prisons who have been charged with Muharebeh. Considering the recent changes in the penal code, they need to be re-tried. After a re-trial most of these prisoners are expected to be released. HRANA published the names of 32 prisoners of these two prisons who have been charged with Muharebeh.
According to the report of Human Rights Activists News Agency (HRANA), considering the fact that article 186 has been superseded, political prisoners with the charge of Muharebeh need to be re-tried. Therefore the names of 32 prisoners who are imprisoned in Evin and Rajaei Shahr prisons on this charge are being published by HRANA. END_OF_DOCUMENT_TOKEN_TO_BE_REPLACED